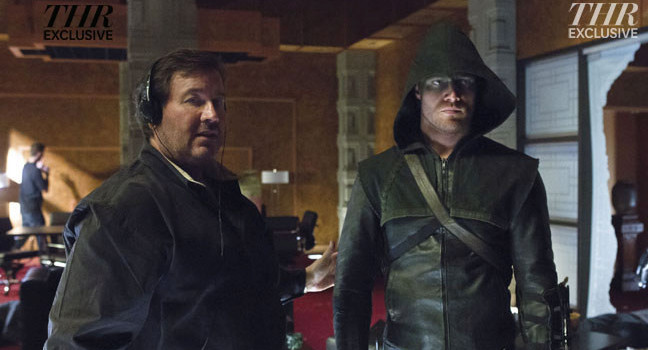 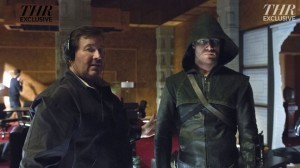 When word came down that David Nutter would be directing the pilot episode of Arrow, folks who had watched as other comics to TV projects had been developed that fizzled could breathe a sigh of relief.

The very successful director, who early in his career even directed for the syndicated Superboy series, is notable for helming pilots for many well-known shows, including Millennium, Smallville, Dark Angel, Roswell, The Mentalist, Supernatural, and Terminator: The Sarah Connor Chronicles. In all, 17 of Nutter’s 18 pilots have gone to series after successful first hours. Already, Nutter lists Arrow as one of his favorites.”I’ve done a lot of pilots, and none better than this. This really just turned out wonderfully, he says. “The actors and the writing on this are just so fantastic and so rich and so wealthy with great storytelling, smart storytelling, adult storytelling… it’s a very mature subject in some respects, and the way they treated this show, it’s not a situation where often times with comic book TV shows, this is not ‘the TV version of…’ This is big time movie stuff, and it looks like that as well. We have a lot of crew from the Smallville series working on it, so it’s going to have a lot of scope and expand upon that, and the actors… Stephen Amell, who plays the character of the Arrow, Oliver Queen… I’ve never worked with someone so initially talented with such great instinct. He’s really amazing. Katie Cassidy is tremendous. She plays Laurel Lance. There’s great drama, and her best stuff is yet to come, for sure,” he says. 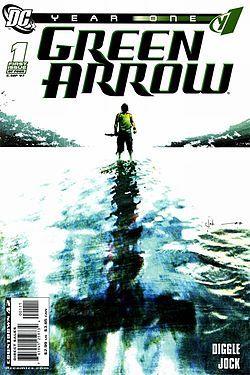 Arrow starts with an opening sequence that evokes Andy Diggle and Jock’s Green Arrow Year One comic series, and Nutter says that similarity is “very much” intentional. “The entire sensibility of the show is really based on Green Arrow Year One. We kind of took it from that as our perspective, in some respects, and the look of that opening sequence is one that I wanted to really mix it up. I wanted to make you feel like you’re a part of it,” he says.

“I’m a big believer in emotion involving the audience. In some respect, it’s all about point of view,” Nutter continues. “It’s always about ‘I’ve got to get the audience to lean in and care.’ And also, too, it’s a situation where to do that, you have to create a world that’s real; a world that people can access and understand, and be something that they can relate to. You want to set up that world, and then you get them to care. Then you can throw the paranormal at them, or throw things  at them that are actually strong, and it emotionally affects them. I think with respect to the opening, we didn’t have an island in the middle of the Pacific to shoot this, so it’s all about ‘what do we not see, and how do we best affect the audience and make them think that he’s very far away,’ and I think it worked very well.”

As we will see on the island, there are some callbacks to other DC Comics elements, but Nutter insists that when we do see them, they will be steeped in reality. “You will be seeing DC Universe characters and Green Arrow characters in the series for sure, but it’s really going to be a ‘peel of the onion’ situation, and you’ll see them in a realistic light. They’ll be real people. They won’t be walking in the episode in a crazy outfit or something. We want to make this as grounded as possible, and make it as believable as possible,” he says. He adds that no mandates or rules were set down from DC Comics or the parent studio. 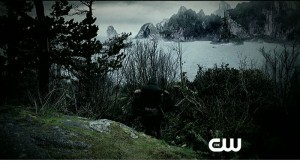 “I think that, with respect to Warner Bros. and DC together as a team, there were never any mandates. Their only rule was ‘how do you tell the best story?’ And Andrew Kreisberg, who was one of the creators, of course, he wrote Green Arrow comics. Mark Guggenheim is very knowledged in that world, and Greg Berlanti is one of the best producers in Hollywood. They understand how to tell a good story, and what they wanted to do is ‘how do we make a story that can broaden out the audience base?’ Not just make it a superhero show, but make it a show about heroes, and make it about justice. One area we were leading toward more is not to try to do something in the air of a Smallville world, but more like The Equalizer, the old TV series. That kind of situation, to balance out the type and tone of the show. I think it really worked out so beautifully, with respect to the writing and the series and everyone’s involvement. It was about how to tell the best story, and they know how to do that,” he says.

Continuing the theme of keeping the show grounded, Nutter says the show’s maturity will “really give it a sense of weight.” “I know that there have been some superhero shows attempted in the last two to three years, with other people, that I thought were kind of juvenile in some respect in how they created the superhero. I’ve been involved in science fiction based stuff for a very long time, and you have to respect the audience, because they’re the strongest and the best. But also, true, if you’re not true to trying to tell a great story, they’ll spit you out in a second. So I think the object there was to really admire the intelligence of the audience, and play to that, which is the most important part of it,” he says. 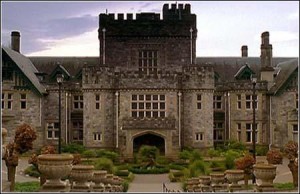 The Arrow pilot afforded Nutter and his team to visit a location that was seen in the Smallville pilot but was never actually used beyond the exteriors – the Hatley Castle in Victoria, British Columbia. On Smallville, the castle was used for Lex Luthor’s mansion; now, we see it as the residence of Oliver Queen and his family. “What happened this year was when pilot season started, I went up to Vancouver very quickly, and I said ‘let’s get this location, this location, and this location before anybody else can get ’em,’ and we got these locations, and we had a chance to do the castle on Victoria which was really primo,” he explains.

Nutter sees no end to the possibilities for the show after the pilot. “In the pilot, there is that list. There is that episode of the week situation. There is that situation where every week, there will be that part of the story. But also, what is really wonderful is that we’ll also be taking the series back into the world using flashbacks, and seeing, basically, what made him who he is today. We’ll be going back to the island, and really dealing with that, and finding out what causes his physical and emotional scars that turned him into he is today, and what changed him,” he says, comparing Oliver to a certain dark knight who dresses himself as a flying rodent. “The thing with Oliver Queen is the fact that, unlike Bruce Wayne, he was an @$$#ole when he was younger. So now, he has to wear so many different masks in his new life, that you’re going to be dealing with that emotional story as well. It’s also a family drama in some respects. You’re dealing with his little sister, his mother, and all the complications, and where that goes, as well. It’s very interesting how the show’s going to take off,” he says.

Arrow premieres October 10 on The CW. Read some of our other Arrow interviews here at GreenArrowTV – this concludes our run of Comic-Con interviews, but some more good stuff should be on the way between now and October!