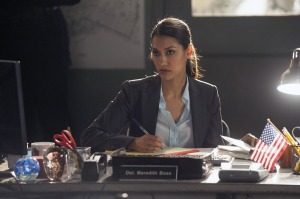 One of Oliver Queen’s love interests in the first season of Arrow was McKenna Hall, played by True Blood veteran Janina Gavankar.

Tonight, Janina re-teams with Arrow executive producer Greg Berlanti for one of his newest shows, The Mysteries of Laura, which gets a special “preview” at 10PM on NBC tonight (September 17) before moving to a timeslot of Wednesdays at 8, which means if you want to see Janina in action, you better hope for a DVR since Arrow Season 3 premieres in that spot two weeks later on The CW. We spoke with Janina a few weeks ago at an NBC event to talk about her new series, and whether or not she would return to Arrow.

“The big joke is that Greg only lets me play detectives on his shows,” Janina laughs. “She is a very different detective than who I play on Arrow.”

“Laura is the bane of Meredith’s existence,” she exclaims when asked about her character Meredith Rose’s relationship with the lead character, played by Will & Grace and Smash actress Debra Messing. “In Meredith’s opinion, she works twice as hard and twice as long as Laura, but Laura gets all the accolades, and it drives her nutso!”

“One of the reasons why she doesn’t understand Laura is because she doesn’t have kids,” she continues. “She thinks Laura should just suck it up, but she has no idea how complicated Laura’s life is.” 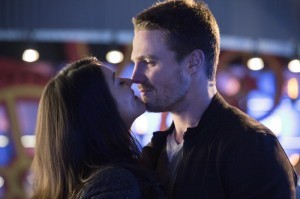 Might Janina ever come back to Oliver Queen’s life on Arrow?

“I would love to go back,” Janina says, pointing out that the Burbank production offices for Arrow are right next door to the writers’ rooms for The Mysteries of Laura. “I would love to go be on The Flash, because that’s where my character is [Central City], right? And now it’s all about contracts. But I’m going to tell Greg, and if we can figure it out, I’d absolutely love to do it.”

Finally, beyond her role as McKenna, Janina is also known for playing supernatural characters on shows like True Blood and The Vampire Diaries. Is it nice for her to be playing a human on a regular basis?

“It’s nice to be human, even though I approach every character from a completely humanist point of view. So even if she shapeshifts, I think about the human first. The fact that she can shapeshift is just icing on the cake. But I really do root my characters as much in their human behavior as possible,” she says.

The Mysteries of Laura premieres tonight (September 17) at 10PM on NBC.