Interview: Colton Haynes On Roy’s Changing Alliance With The Arrow 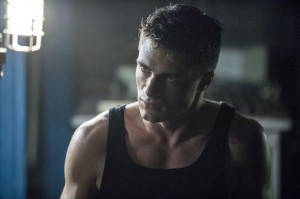 In case you’ve missed our last dozen or so posts, the midseason premiere of Arrow is on tonight at 8PM on The CW, and it’s fantastic. It’s called “Three Ghosts” and features more of Brother Blood and his experiments, some surprising faces in Starling City, more Barry Allen, and an investigation by the show’s titanic teen team of Roy, Thea, and Sin.

In anticipation of tonight’s episode, and despite some communication issues on our side that were probably compromised as part of an evil plot by Sebastian Blood, we spoke with Colton Haynes (Roy) about what happened last week with his character’s alliance with The Arrow and what that might mean going into tonight’s show as well.

“He’s really pissed off!” Colton confirms about Roy’s reaction to getting a shot to the leg from the Hood last week. “It’s very unexpected; not something he thought was going to happen. But also, it’s a warning shot. You don’t know what you’re getting yourself into. Now I’m going to slow you down. So, his reaction is that his fanboy dreams of possibly teaming up with the Hood, there’s a big arrow in between that want and need right now,” he says. 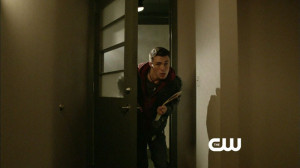 With that said, though, Roy is continuing to move forward, still investigating what happened to Sin’s friend Max despite the vigilante’s warning. “Roy is now starting to consult with his little mini-team of Sin and Thea, and Thea is taking charge and saying ‘I’ve had enough of this. We’re not gonna stand for this,’ and so that’s what’s keeping him going forward,” Colton tells us.

With Sin being a part of Roy’s “helping the Hood” life, and Thea being part of Roy’s civilian life, one would think it might be awkward for Roy to juggle the two. Colton actually does not see the situation as that bad for him.  “It’s not awkward for Roy, because Thea’s started taking a liking for Sin as well, but Thea doesn’t know their past yet,” Colton speculates. “That’s going to be an interesting factor between their relationship, is to find out a little more with the past. In the past few episodes, now Thea’s been suggesting that we can help Sin now, so that’s a really, really interesting thing that happens, because now she allows Roy to go and try to find Max. She’s allowing him to get back in the game,” he says. 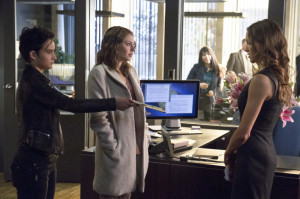 In following some leads about Max’s final days, Roy and his friends consult Thea’s old “boss,” Laurel Lance. “We do go to her [in “Three Ghosts”]. She gives us some information that of course leads Roy to start snooping around in the wrong places, which ultimately leads to something that happens to Roy that is going to affect his relationships with here on out,” Colton teases. However, don’t expect Laurel to take a place aside Roy and his junior Superfriends too much — they don’t interact much more in the coming weeks after this one. “Laurel’s not exactly in a very good place in her place right now. She’s going through some problems of her own,” Colton says.

We will have more from Colton posted here at GreenArrowTV tonight at 9PM Pacific time after the episode has aired. Our thanks to Colton Haynes for speaking with us, and if you’re looking for some extras related to tonight’s show, you’re in luck! Check them out: