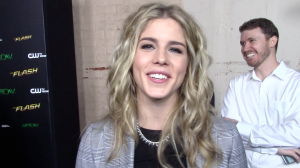 The crossover between Flash and Arrow is almost here – Tuesday night is the night it all begins – and last week on the carpet for the Flash/Arrow crossover screening, we asked Emily Bett Rickards (Felicity Smoak) some questions in anticipation of the event. But first, a question that many have been wondering: Is Oliver aware about the kiss that happened between Felicity and Barry Allen on The Flash a few weeks ago?

“No,” she says. “Good question, but no. Why would she tell him? Oliver doesn’t deserve that kind of information,” she laughs.

“I just don’t know if that’s something Felicity would just go and say to him, because they’re not in a relationship, nor is that something you reveal,” she continues. “Also protecting Barry, because that’s her friend, so why would she give up that? She’s got to protect him too, and his feelings. Why would she just go say it?” 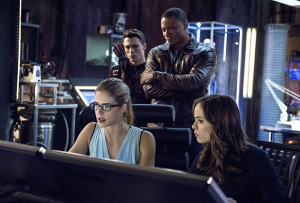 Felicity is part of both the Arrow and Flash families, and it’s up to her to bring them together. “She’s got to play the comrade of both of them, and the problem solver, designing equations in how she can put them together. Put them in her little beaker, and shake it up, and make them explode in a good way with sparkles,” she laughs.

Part 2 of the crossover, Wednesday’s episode of Arrow, sees Danielle Panabaker’s Caitlin Snow helping Felicity out with something tied to solving the mystery of who killed Sara. “Caitlin and her have a really interesting relationship. I think it’s beautiful, they’re becoming friends, and they’re both women of intellect, without secrets. That’s what’s so important. Having another woman on the team without secrets; that’s really beautiful. Caitlin’s brilliant and she also has these technical advances that we don’t have in Starling City, so that’s really important,” she says.

Emily is excited for the fans to see the crossover. “I’m really excited! I think they’re going to have a really good time, and I hope they are rewarded with what they want to see,” she says.

You can see video of the interview below. Don’t miss the crossover December 2 and 3 on The CW! Photos from the crossover can be found here. There are more interviews where that one came from, so be sure to subscribe to our YouTube channel!

(And for the curious: When the interview is interrupted with someone saying “don’t believe anything she says,” it’s Stephen Amell, joking.)