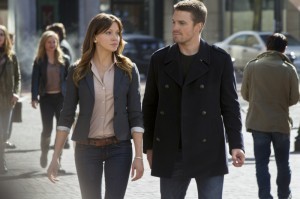 Taking on the role (but not yet the fishnets) of Dinah Laurel Lance on Arrow is Katie Cassidy, an actress that’s been in a number of high-profile projects including Supernatural, Harper’s Island, Melrose Place (2009 version), A Nightmare On Elm Street, and Gossip Girl. She has often been a fan favorite, and her role as Laurel on Arrow is sure to be one that people will root for.

GreenArrowTV’s Craig Byrne spoke with Katie Cassidy last week for a one-on-one interview at the Television Critics Association Press Tour in Beverly Hills, California. Like the Andrew Kreisberg/Marc Guggenheim interview, we’re presenting the interview in a Q&A style and format. Please do not reproduce this interview onto other websites; instead, just place a link to KSiteTV! Thanks! Questions are posted in bold; Katie’s answers are not. Enjoy the interview!

When you were going out for pilot season this year, what was it that drew you to Arrow?

The reason I picked the script to read was because it was Greg Berlanti. It was David Nutter. It was Andrew Kreisberg. It was Marc Guggenheim. I was like “these are the people I want to work with.” They’re smart, they’re creative, they’re edgy, interesting… I knew we would speak the same language.

After I read it, it was awesome. I loved the character, and after Stephen was attached, I was like “sign me! Sign me up! I need to be in on this show!” And then it sort of just happened, organically. It was nice.

Have you gotten used to shooting in Vancouver yet?

I haven’t yet, just because I haven’t gotten in my apartment. I’ve had to stay at a friend’s house. But August 1st, I move in. So I’m excited about that; then I’ll feel a lot more settled. Calm and collected, like I have a place to go back to that’s my own. 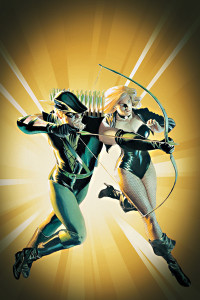 There’s an arc for Dinah Laurel Lance in the comics, and being a multi-season TV show, they’re going to have to take their time. What kind of speed would you like for them to go on the show?

Lightning speed! [laughs] I hope it happens. I hope it happens soon, because I want to kick some ass. I think it would be fun. Everyone asks me if I’ve been fight training, and I’m not. So I don’t know. I don’t think it’s a good question for Andrew Kreisberg.

I know you did Supernatural before, but was it intimidating to take on a project with a sci-fi/genre fanbase?

Yeah, in terms of stepping into a world that there are other people that know far more than you do, who had been Green Arrow fans for years. I have never read the comic books, so it’s intimidating, because I don’t want to step on anyone’s toes. I want to make people happy, and proud, and excited, and I want to do all good things, and do it justice. So yes, it can be a little intimidating, but I try not to get caught up in that.

What was your impression upon seeing the finished pilot?

It looked like a movie. I was beyond impressed. I was excited. I felt like the biggest dork in the world, because I literally was talking to my mom and my dad, and I was like “IT’S SO COOL!” They were just as excited. It’s fun.

Your dad, David Cassidy, played the Mirror Master in The Flash TV series, and your grandfather, Jack Cassidy, was the villain in the It’s A Bird… It’s A Plane… It’s Superman musical. Did you see taking on a comic book role as a bit of a family legacy?

Possibly. It’s very possible. It’s funny you mention that about my dad. I did not know that! It’s good to know.

My grandfather, I did know about. I heard he was amazing in that part. It’s unfortunate that I never had an opportunity to meet him. I hear he was a brilliant actor.

On the subject of relatives, have the producers told you more about Laurel’s mother yet? 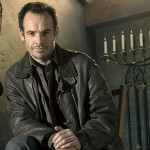 Have you able to work with Paul Blackthorne (who plays Laurel’s father, Quentin Lance) yet?

Yes. The man is a genius. We are so lucky to have him. He is a tremendous actor. It’s so nice to work with someone who wants to serve the other actor, and help you get the best performance out of you. He’s very talented, very professional, and it’s really inspiring to watch. He does beautiful work. He’s great.

We only saw CNRI a little bit in the pilot. Can you tell me what exactly they do?

Basically, [Laurel]’s a pro bono lawyer, and they deal with more of the underprivileged victims who can’t afford a fancy attorney. They are going in with a purpose, to get justice where they feel justice should be served. We get more into that world as the show progresses.

What kind of friendship does Laurel have with Joanna (Annie Ilonzeh)?

She’s great. They are very close. They’re really good friends. I think Joanna’s more like the fun side than Laurel maybe once had, going out and having a good time… but they’re friends.

Do they have differing opinions about the Arrow, or have they not discussed it?

They certainly do have different opinions. Joanna does not want to touch on that. I think she’s careful and delicate with how she deals with that situation. 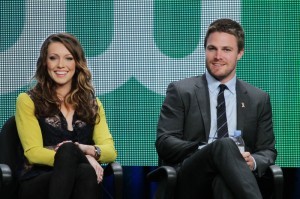 She does try to see the good in him, and I think she finds him funny and ridiculous. I have a feeling the three of them grew up together, so she knows him, and his attitude, his arrogance… I think she knows that’s a front for something, and she just thinks it’s a little ridiculous.

What can you say about Episode 2?

It surpasses Episode One in the production of it. It’s so big. It looks like a movie. It totally does. It’s action-packed. You see a little bit of Oliver and Laurel together more. You get to see some court stuff that goes on, and Laurel in that situation. It’s awesome. It’s so great.

Is Laurel going to be involved at all in the China White plot?

It’s certainly a possibility. The two worlds, the corporate world and the action world that you see, they do a nice job in bringing the the two together.

How would you pitch Arrow to someone who has not seen the pilot, and might be thinking about watching on October 10?

Come back tomorrow for our one-on-one with Stephen Amell! Thanks to Katie Cassidy for doing this interview. Everyone’s invited to come by our newly-expanded Arrow forum to talk about it!