Arrow2535 Elseworlds9 Elseworlds Part 21 Green Lantern21 John Diggle's ring1 John Stewart6 spoilers10 what is John's ring1 where is your ring1 You're not wearing your ring1
A long-standing fan theory about Green Lantern was referenced on the Elseworlds chapter of Arrow tonight.

Warning: Spoilers for Part 2 of the DC TV crossover “Elseworlds” are being discussed within.

Part 2 of “Elseworlds” aired tonight as the 9th episode of Arrow Season 7, and there’s a moment — once they get John Wesley Shipp’s Flash into the scene — where Shipp’s Barry turns to John Diggle and makes an observation: “You’re not wearing your ring!” 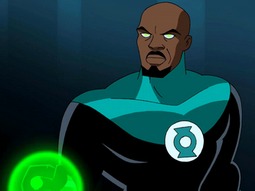 Non-comic fans might wonder what that is supposed to mean; even fans of the comic books might be confused. But the reason for it is actually this: For years now, there have been fans that are convinced that John Diggle is actually John Stewart, a comic book character that made his first appearance during the legendary run of Green Lantern/Green Arrow comics. It was John Stewart who was Green Lantern from the Justice League cartoon, and therefore, that is the Green Lantern known best by a generation.

By asking John Diggle where his ring is, the implication is made that on Earth-90, where this Flash hails from, John Diggle is John Stewart. Or, at least, that John Stewart is played by an actor who looks like David Ramsey.

Also note, even though it shouldn’t need saying, that John Stewart has no relation to Jon Stewart the Daily Show host.