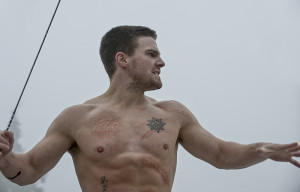 The midseason finale of Arrow just finished on the East Coast, and from the looks of things, it looks like Stephen Amell’s Oliver Queen may have taken a sword through his chest and been killed by Ra’s al Ghul.

But wait! Isn’t it his own show?

That will surely be the mystery as Arrow returns on January 21. We’ve heard before that the next few episodes focus on characters like Laurel and Team Arrow… and we also know Stephen Amell had some more time off than usual last month, as evidenced by his “Movember” mustache.

Stephen did make a Tweet about filming Episode 60, and even posted a photo of himself with Colin Donnell, who appears in the 60th episode, which implies that he’ll be back by that point. Unless he’s only around for flashbacks, since he’s got another few more years to do in flashback form.

With that said, Amell tonight did tweet “It was a good run.”

Also, this is a world with Lazarus pits and that sort of thing, so we’re sure there won’t be an Arrow without The Arrow for too long. Episode #14 of Season 3  is called “The Return,” which we thought was a hint, but Executive Producer Marc Guggenheim says the title does NOT refer to Oliver, or to Slade Wilson, who appears in the episode.

Needless to say, you can look to GreenArrowTV to try to find out what’s going on. Sure makes for great television, though, doesn’t it?

Come talk about “The Climb” on our forum!