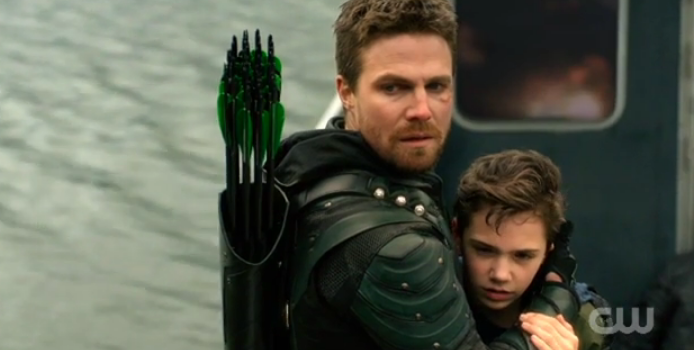 When last we left our intrepid gang of heroes and ne’er-do-wells, Simon Morrison, better known as the duplicitous Adrian Chase (the fabulous Josh Segurra), took his own life to set off a dead man’s switch tied to a network of bombs strewn across Lian Yu. Oliver, his son William in his arms, watched in horror as the island in the South China Sea erupted in vicious explosions, unsure if all of those closest to him were just killed.

So, how does Season 6 open? The cast and executive producers Marc Guggenheim and Wendy Mericle spoke with Entertainment Weekly on Saturday at San Diego Comic-Con and touched on just that.

Spoilers ahead if you don’t want to know anything about the new season before it starts.

As fans of the show know, it tries to keep events occurring mostly in real time throughout the season. Each season starts in the fall, months after the events of the previous to match the summer hiatus. Season 6 will be no different.

The Season 6 trailer showed us that Oliver has been taking care of his son back in Star City, and that’s where we find them in the premiere. To fill in the gaps of what happened in the aftermath of island explosions, the opening hour will rely on that trusty tool you thought may have been disappearing altogether: the flashback.

“We have flashbacks in the first episode to the aftermath of the explosion, and I can’t say anything else,” said Amell.

No one got any more in depth about specific events. Though, from the trailer, we know that Oliver returns to the island and finds Slade Wilson alive amongst the smoldering embers. The trailer also confirms that Juliana Harkavy’s Dinah Drake survives, as she adds a full suit to her mask and assumes the identity of Black Canary. The criminal doppleganger of her predecessor, Dinah Laurel Lance, is confirmed alive as well, as they square off against one another at some point early in the season.

The only confirmed death of those on Lian Yu is that of John Barrowman’s Malcom Merlyn, who seemingly gave his life to protect his daughter Thea from a landmine. Barrowman has said definitively that Malcolm is dead, but in this show, unless you see a body — and in a number of cases, even if you have — it’s hard to count a Dark Archer down.

It’s safe to say that the majority of the cast survived and will be back for Season 6. Our money is on William’s mother, Samantha, having perished at Adrian’s hands. At the very least, she’s incapacitated in a way (coma?) that drives Oliver to take in his son and try to raise him. It sounds like that’s understandably not going well when the season opens.

What are you looking forward to in the season premiere? Who do you think survived and who didn’t make it? Let us know below.