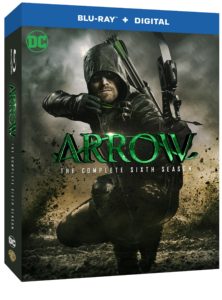 Arrow: The Complete Sixth Season hits Blu-ray and DVD this Tuesday, August 14 from Warner Home Video, containing all 23 episodes of Season Six plus some great extras. Here’s how WHV describes the season:

The Episodes: First off, I need to point out that – even though it wasn’t clearly advertised – the set includes ALL FOUR chapters of the “Crisis on Earth-X” crossover. This was a bit of a concern, considering that a major moment for the Arrow characters happens in the Legends of Tomorrow chapter. Seeing them in the high definition of Blu-ray was certainly a treat, and as good as Arrow looks on TV every week, I have to say that on Blu-ray, it looks even better.

I’ve rewatched several episodes on this set already, and I have to say I had forgotten how strong the season started. I’m curious to see if my opinion on the whole OTA vs. NTA stuff from the latter half of the season will change now that we know how the season ends. I liked some of the changed emotional stakes in Season 6, and felt several actors did some of their best work this year.

The Extras: In addition to the three bonus “Crisis on Earth-X” chapters, there’s an “Inside the Crossover” sit-down with several of the executive producers of the carious shows as well as “The Best of DC TV’s Comic-Con Panels” from 2017. I’m curious if the crossover sit-down and “Best of DC Panels” will be on all of the DC TV sets here, as even Gotham was included in the DC panels. Usually we just get the specific show involved.

There’s a featurette about Deathstroke, which is great as I loved Manu Bennett’s take on Slade and all, but… I’m not really sure that’s really what a set like this needed. When Slade was last on the show, it was October or November, and so his time on the series was old news. I do understand, though, that these features are often planned out early in the season. I actually would have liked something about the fracture of the team, perhaps; or maybe a feature about Ricardo “The Dragon” Diaz. Or even something about Black Siren? It just seemed kind of like out-of-place old news. There’s also a feature about Cayden James, which is the same sort of deal, as he was done away with sooner than 2/3 through the season. (Spoiler alert!)

There’s no gag reel, which is probably just as well as they have gotten so repetitive, but I was also disappointed by the lack of deleted scenes. Arrow in the past has always had wonderful scenes on the cutting room floor, and I’d imagine Season 6 is no exception. So what gives?

Design: The box art is really nice looking, as are the menus and disc art.

Is It Worth It? It’s absolutely worth it to get to see Arrow looking this good, and the “Crisis on Earth-X” feature with the producers itself was more than enough reason to buy. It’s also enjoyable to see the various Comic-Con panels if you missed them in person, especially seeing what they tease vs. what we actually had. Yes, you can watch the show on Netflix etc., but at this kind of video quality is hard to beat. It’s definitely on the “recommend” list. And, again, with the crossover, it’s a total of 26 episodes on one set, which is really nice.

Order Arrow: The Complete Season 6 from Amazon.com and support GreenArrowTV while you’re at it!