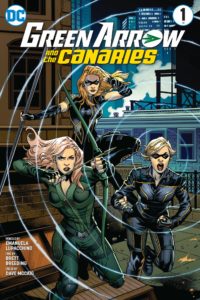 The Arrow tradition of the next-to-last episode of the season having the title of a Bruce Springsteen song is being broken… sort of.

“Unfortunately, the studio required us to officially title the episode after the planned spinoff, thus demonstrating no respect for tradition,” Marc Guggenheim said on Twitter.

But he did say what he would like for Episode #8.9 to be referred to.

“Therefore, I would appreciate it if we could all just agree that the REAL title of 809 is ‘Livin’ In the Future.’ Thank you all,” he continued.

So… “Livin’ In The Future?” Does the future still exist after Crisis after all? Could we be seeing “Future Team Arrow” teammates including William and Connor? Hmm. That we can’t tell you.

This also lends credence to “Green Arrow and the Canaries” being the title of the Arrow spinoff featuring Katherine McNamara (Mia), Katie Cassidy (Laurel), and Juliana Harkavy (Dinah) — considering the fake comic book cover and all. The title “Canaries” has already been used for an Arrow episode, and despite poll spamming implying it is what the fans want, the spinoff is not going to be called “Mia Smoak” since it would leave out the possible show’s other two leads. If successful, Green Arrow and the Canaries — or whatever it will be called — will be previewed in early 2020 as the ninth episode of Arrow Season 8 and next-to-last episode overall for a potential spot on The CW’s 2020-2021 schedule.