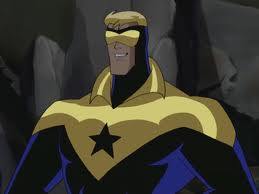 A few weeks ago, it was announced that The CW is looking to do an Arrow/Flash spin-off centering around Brandon Rotuh’s Atom that would also star some familiar faces like Caity Lotz (even though Sara is supposedly dead). No further details were revealed aside from the notion that it would be a “superhero team-up” and some new characters would be joining the cast, which would also include Victor Garber’s Martin Stein and Wentworth Miller’s Captain Cold.

Tonight, TV Line posted details on three characters that are being cast, with their own guesses as to who they might be. You can read their original piece here. If you want our take, though, read on.

First up, they’re casting “The Traveler,” who is described as a “Han Solo-esque rogue” who gets by with his charm. This character comes from the future, and has journeyed back in time on a secret mission. TV Line says “his razor-sharp wit hides the pain of a man who has lived through serious conflict. He also harbors many secrets, always leaving both his teammates and the audience unsure of his true allegiances.”

Our take: Time travel, eh? Do we now know how Caity Lotz factors in? In any event, it was revealed late last year that Booster Gold isn’t still tied up with Syfy… though, Rip Hunter would also be a good possibility for such a character. Whoever it is, they totally know Harrison Wells, right?

“Female Warrior” is the codename they have for a twentysomething Latina who is described as “pretty but unassuming, book smart and socially awkward by day.” At night, it’s a different story – the description says “her fury is ignited and she becomes a fierce warrior — so much so, that sometimes she can become a threat to others.” Yolanda, the 1980s Wildcat, maybe? We don’t really have a good guess for this one. Leave your own in the comments.

“Mystery Hero” is described as “an African-American male in his twenties will fill the role of a regular, street smart guy who unexpectedly gains powers, and then, as part of the team, regularly quips about the insanity of the situations.”

Our take: TV Line’s guesses all involved characters with electricity-based powers – Static, Black Lightning, and Black Vulcan – even though the description didn’t necessarily point there. Static would be the coolest choice, but he’s also tied up with a CW Seed series right now, and there might be further legal difficulties with him being a Milestone character. Our feeling is that this, too, could be just about anybody.

Again, you can read TV Line’s thoughts here, as they’re the ones who brought these character descriptions out to begin with. Leave your thoughts below! And, hey… this project doesn’t have a name yet, does it? We’re still hoping for Challengers of the Unknown, darn it.