Arrow: Ten Teases And An Advance Review For “The Undertaking” 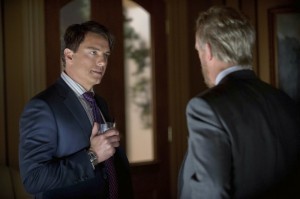 Yesterday, he CW sent press early screening copies of tonight’s new Arrow, titled “The Undertaking,” which is always a treat. This week, screening an episode early was especially great as “The Undertaking” is definitely one of the best episodes of the series so far. Every level — from the acting and the stunts all the way to the script, which weaves all of it together perfectly — works.

There’s drama, there’s humor, there’s action, and I’d dare say there’s setup for the season finale, which airs on May 15. They say Episodes 22 and 23 work together well as a season finale; I respectfully disagree. This works as the kick-off to the finale, much in the way that, say, “Utopia” worked to set up the Series 3 finale of Doctor Who. Lana Cho and Jake Coburn definitely deserve a shout out for a flawless script.

So do you want some spoiler teases that spoil but hopefully don’t ruin anything? We’ve got ’em. Here are some hints of what to expect: 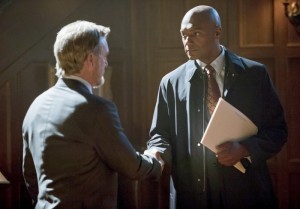 1. We finally learn what “The Undertaking” is and [it seems] we get some hints for what Malcolm Merlyn is planning. You want more Malcolm Merlyn? You’re getting more Malcolm Merlyn, which also means we get a bit more John Barrowman than usual this week. In flashbacks to the time before the Queen’s Gambit went down, we learn what exactly Malcolm wants to do with Starling City — and how Robert Queen (guest star Jamey Sheridan) reacts. Colin Salmon is also back as Walter for these flashbacks, and there may be some other faces and names we may not have expected to see or hear on the show again. Speaking of Mr. Salmon… I missed Walter. I don’t think I realized how much until we got to see him again.

And speaking of the Undertaking, it appears that hints have been planted all the way back to the pilot; we just didn’t realize it. Clever, Team Arrow. Clever.

2. Some serious emotional beats. Almost every emotion is touched upon and played with in this episode, including a moment between Oliver, Moira, and Thea that, being 21 episodes into the series, is definitely earned.

3. DC Universe shoutouts. Keep your ears open for references to other DC Comics characters, no matter how small their role in the DCU may be. It had already been spoiled that the name “Brian Markov” would be factoring into things; just wait until you find out how. I’d have to rewatch a scene, but I’m pretty sure even Robert Queen mentioned a DC character when talking about a fundraiser. (No, not that guy) 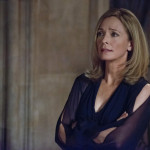 4. Bludhaven. Speaking of that guy, we finally get to see the world outside of Starling City for a scene, and it made me wish ever so much that Bludhaven’s resident vigilante was there. Next time? Or in his own series? Thanks. (I’m referring to Nightwing) Bludhaven also gives us a REALLY great action sequence from the Arrow stunt team. 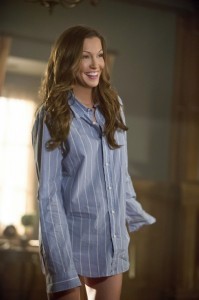 5. Oh, How They’ve Changed. While it’s especially nice to see how Walter and Moira acted and looked in the flashbacks, a big character piece is seeing how different Oliver and Laurel were back in the day. It’s amazing how being clean shaven and wearing a wig can transform Stephen into a totally different person, though some really good acting helps there as well. I find past-Laurel to be a little bit annoying, though that was likely the idea. Sadly, it seems that whatever was planned for Thea in the past ended up on the cutting room floor.

6. And in the present… the Laurel/Tommy/Oliver triangle is back as Oliver tells Laurel… something. Tommy, by the way, is working at his father’s office now, looking more and more like his father each day.

7. Product Placement. Yes, this is the same TV world where Jeremy and Bonnie had underground Mifi on The Vampire Diaries. Here, we get to see Thea and Moira shopping using the new Windows. I wish I was making it up, but hey, if it keeps the show on the air, I guess it has to pass.

8. No Island. This episode features no flashbacks to Oliver’s time on the island…. but so much is going on, you really don’t notice. It’ll be back next week. 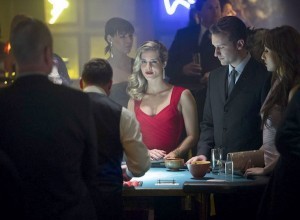 9. We see Diggle’s place! “He’s shallow like the rest of us!” No, but we do see his sixth-floor pad, complete with a very new looking refrigerator. (Hey, I notice weird things.) Hopefully his rift with Oliver will be sorted out sooner rather than later.

10. Felicity gets the best line of the show. Marc Guggenheim has teased it on Twitter, but if you haven’t heard it already, you’ll know it when you see it. Some fun undercover work from her this week, by the way, as well as some emotional beats.

Is tonight’s episode of Arrow any good? That would be a resounding yes. Tune in, tell your friends to tune in even if they’ve missed the last few, and buckle up for the ride. It’ll be as explosive and bumpy as a boat trip on the Queen’s Gambit, but it’s so worth it. Easily within my list of Top 3 episodes of the season, and I have a feeling it’ll get even better from here.

Arrow airs at 8PM (ET) tonight, May 1, on The CW Network. The countdown at our forum has now begun and can be found here; preview images can be found below: 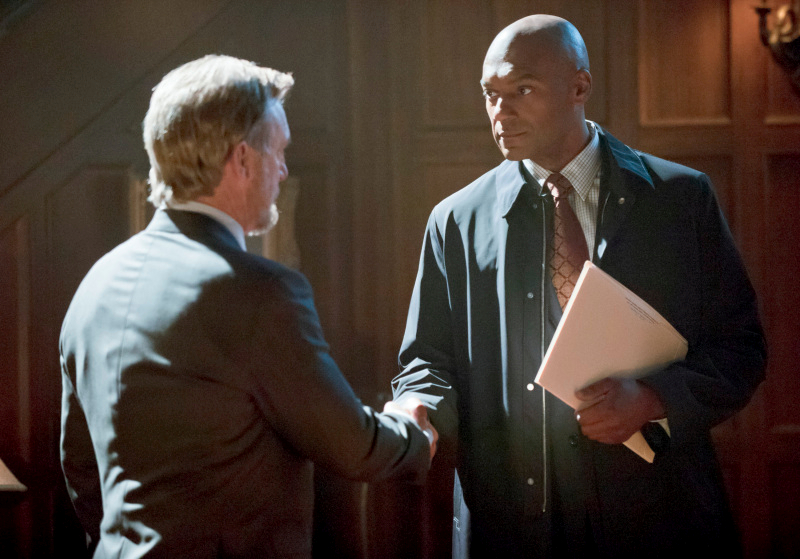