This year’s crossover between Arrow and Flash has characters from a third show factored in – Legends of Tomorrow – and tonight on the Vancouver set of Arrow, we spoke to Stephen Amell about the superhero team-up. The full interview with video will be posted in the coming weeks. 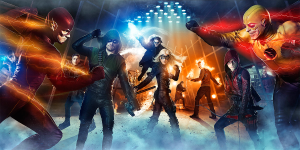 “Last year was designed so that if you were a fan of one show or a fan of the other show, you could enjoy 108 of Flash and 308 of Arrow independent of one another. It’s not the case this year. If you put them back to back on one night, they would run like one two-hour episode of television,” Stephen told a group of reporters tonight.

“In fact, most of the Flash episode takes place in Star City, and most of the Arrow episode takes place in Central City. We have a common villain, which was not the case last year, and just in general, we’ve done an excellent job of weaving not just two shows, but three shows together. As always, it was logistically challenging, but I think when they’re finished… whenever that is, because there’s little pieces here and there to grab… I think these crossover episodes standing together will probably be, in my mind, the pinnacle achievement for both shows,” he continued.

“When we started shooting Arrow, there was just me, right? And then when they started The Flash, it was just Barry, and then obviously, the worlds expand… we shot a scene that had, like, nine superheroes in it. Nine people with either powers or super suits,” he said. “It was an amazing thing to look at, to look out over the scene and see the world that has been built over the course of 3+ years.”

The next Arrow/Flash crossover airs later this year on The CW. Stay tuned here and at KSiteTV for more interviews!