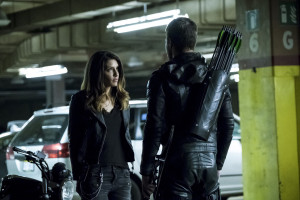 Good news: Two of Arrow’s Season 5 recruits have been promoted to series regulars for the show’s upcoming sixth season.

First up, Rick Gonzalez who has been playing Rene Ramirez/Wild Dog has been promoted to series regular. Rick has long been a favorite of ours since the Reaper days and we look forward to seeing more from him.

He’s not the only one getting a status upgrade!

Juliana Harkavy aka Dinah Drake is also being upgraded to series regular. It will be interesting to learn more of her character’s back story; it’ll also be interesting to see what will happen when someone with a metahuman Canary cry meets the Black Siren.

These two new additions join Katie Cassidy who is returning as a Season 6 series regular as the previously-mentioned Black Siren.