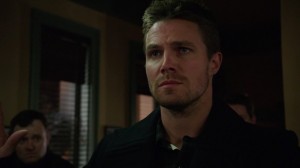 The finale, which airs on May 13, is called “My Name Is Oliver Queen” and there are a few tidbits within:

– The Flash (Grant Gustin) appears in the finale! Though the EW piece suggests that “even with the scarlet speedster on the case, Guggenheim cautions that fans should be very worried about their favorite heroes.” Barry’s appearance on Arrow follows an appearance by Stephen Amell on the May 12 episode of The Flash.

– Guggenheim says that the end of Season 3 is “very definitive” and serves as a bookend to the show’s first three seasons. There won’t be a “traditional” cliffhanger where we worry about the fates of certain characters… (We take that to mean if bad stuff happens, it’ll be before the end).

– Is it true the Arrow finale will set up the Arrow/Flash spinoff starring Brandon Routh and Caity Lotz? Nope. “The Arrow finale doesn’t relate to the spinoff at all,” Guggenheim told EW. “It’s pure Arrow.”

You can read the full EW interview, complete with a lot more quotes, here.