The Arrow Season 2 panel just ended at this year’s Comic-Con International in San Diego, and at it, a special sizzle reel containing the first clips from Season 2 was shown. Friends, I see a Black Canary!

We’ll have more complete reports from SDCC soon; you can read our live tweets on Twitter @GreenArrowTV. But first, how about that sizzle reel? 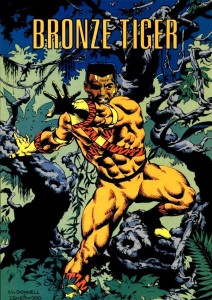 In addition to that, some big guest stars were announced – Kevin Alejandro as Sebastian Blood (aka Brother Blood, no relation to Major Sebastian Bludd) and Michael Jai White as Bronze Tiger. Here’s the press release about that:

Based upon characters published by DC Comics, Arrow is executive produced by Greg Berlanti, Guggenheim and Kreisberg. The series is from Bonanza Productions Inc. in association with Berlanti Productions and Warner Bros. Television