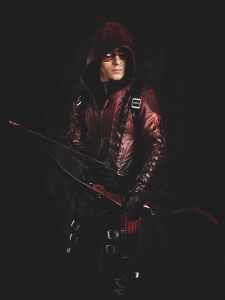 DC Comics has released details about the third printed issue of the Arrow Season 2.5 comic book series, due out on December 10.

The cover is a promo shot of Colton Haynes as Arsenal. Here are the details:

ARROW SEASON 2.5 #3
Written by MARC GUGGENHEIM
Art by JOE BENNETT and CRAIG YEUNG
Photo cover
On sale DECEMBER 10 • 32 pg, FC, $2.99 US • RATED T • DIGITAL FIRST
Oliver’s investigation into the Church of Blood takes him to the darkest corners of Starling City…where both friend and foe are eager to make The Arrow’s acquaintance. Plus: The Suicide Squad heads to Sudan in a thrilling backup story!