On Saturday at the Comic-Con International in San Diego, we spoke with the cast of Arrow in a press room that preceded the big “Night of DC Entertainment” panel that night. One of the folks we spoke to while there was the popular Emily Bett Rickards, who plays Felicity Smoak, the woman who got Oliver Queen’s heart and drove off with him into the sunset — literally — at the end of Season 3.

You can see the interview below, and if reading an interview is more your sort of thing, a transcription can also be found. Enjoy, and subscribe to our YouTube channel for updates on when more interviews are posted! 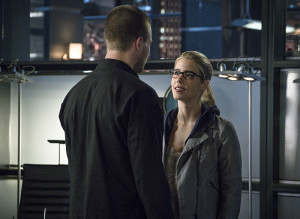 Is it overwhelming, seeing what a fan favorite Felicity has become?

[Laughs] That’s a hard question, because it’s awesome, but Felicity, for me, there’s more of a definitive line . My life has changed a lot because of her, and I’ve learned so much from her. Also, she has become a fan favorite, and I’m a fan of her. I’m happy that people are able to relate to her, because I find that when you can relate to something, when you escape into [something], you’re learning something about yourself, and I hope that’s potentially what she is doing, to a certain aspect. But, yeah. It’s shocking. It’s interesting. It’s rewarding. It really is.

Are you happy that Oliver saw the light, that he could be happy with Felicity? 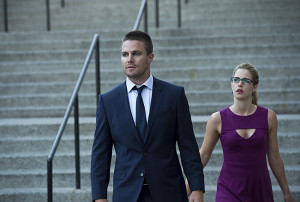 I think that it’s awesome that someone could recognize that they’re happy. I don’t find that that’s something that people actually say. Like “oh, I’m happy.” I’m like “How are you?” “Good.” Auto-pilot, move on. But I think the acknowledgement for himself, finding out that he was happy and possibly grounded more than he has been in the past ten years, because now he’s maybe safe or secure with people he loves… I think that is really important, and a big life hurdle for Oliver.

Have you felt like the ambassador for Arrow in the Flash crossovers?

Not really. I find that she has a really important role in connecting the worlds, because she’s so easily willing to make friends. I don’t think she makes — she’s not very great people with people all the time, but she’s always willing to help people, and she’s generous. 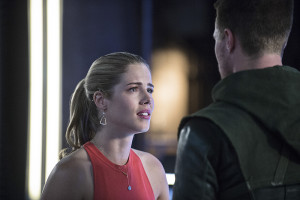 Felicity had to deal with a lot of drama in Season 3. Are we going to see a return of a lot of the levity in Season 4?

I am hoping, and I think so. I mean, [when] we did leave the end of Season 3 – Starling City is not exactly in the best shape. That is something that you can expect. But her emotional security is stronger than it was. I think this whole push/pull thing with Oliver and Ray on top of the secret life was a little bit too taxing on her sense of self, hence why she was crying a lot, and maybe didn’t feel as strong – that’s how I personally felt about that. I think that she’s a really strong, independent woman, and she’s caring and she’s generous, and I feel that is her innate ability, but you also need to be able to pump yourself up, and I feel like she was really taxing herself and accepting a lot of scenarios that weren’t exactly giving her energy. They were taking a lot of it away. And she wasn’t aware of it, which we aren’t on a regular basis. 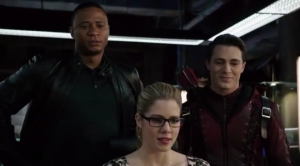 Is it frustrating to see everyone around you suiting up in some sort of suit? Is there any costume envy on set?

I don’t think Felicity really wants a suit. You’ve gotta give respect to her that she loves her computer. She really does… she’s all geared up in all this tech. They don’t get the tech. I mean, they have cell phones and bluetooth, maybe. I do believe that she feels like she’s a hero there and she’s playing her part. Just because she doesn’t have a suit doesn’t mean she’s not kicking ass. 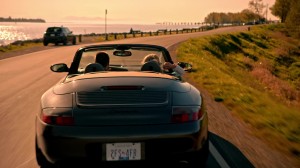 Driving off into the sunset seems like a great idea, and it would be fun, but it could also eventually be kind of boring. Do you think that she’ll want to get back into the grit of things?

I feel like when we find her again, we see her with a void, and I don’t know if she necessarily knows exactly what it is yet, but I do feel like this life that she’s chosen in this Arrow realm – her day job – she didn’t realize how much she appreciated her purpose, and what strength it was giving her, to have this new dynamic in helping people, and how that good that was making her feel, and I think that when you go away, and you live your happy life for a little bit and escape, you get bored, because there’s not the testing or the obstacles, and maybe she’s not helping people in the way she wants to.

Come back to GreenArrowTV soon for more interviews from Comic-Con!