When Arrow returns tonight at 8PM on The CW, Team Arrow will see their dynamics change as their leader and hero, Oliver Queen, is missing in action.

Last week at the TCA Press Tour, we asked Colton Haynes about what this means for the team and for Roy Harper specifically.

“They’re going to have to hit the ground running,” Colton told us, but he says that won’t be easy with so many conflicting personalities. “There are so many people in the lair now, and they all have different ideas of what they think they should do. So I think that that’s going to be a really interesting aspect when we come back.” 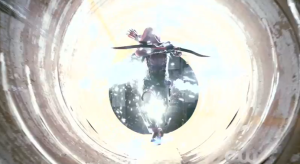 “This isn’t the first time Roy’s had to learn really quickly and then step up,” Colton reminded us, but there’s a lot more going on, too. “He’s going to have to do that, and he’s going to have to harbor a lot of the emotion. The fact that his friend and his mentor is gone. It’s difficult.”

Is Roy going to have to be the one to tell Thea the news that her brother is dead?

“Ooh, that’s going to be the hard thing,” Colton said. “I think that Roy is trying to be in as many good spirits with her as possible, because of what he’s done, he still feels a little ashamed that he lied to her, and she also has a bunch of people on her back all the time, lying to her, and betraying her… and her father is Malcolm Merlyn. So, you can’t think of a worse thing to have than that. I think he’s just trying to be there for her and protect her.”

Arrow “Left Behind” airs tonight (January 21) at 8PM on The CW. Take a look at some preview images!