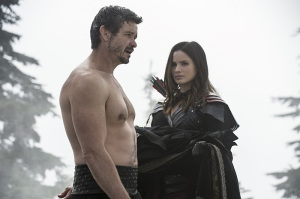 Overnight ratings for last night’s Arrow are in, and it seems some of those Flash viewers who watched for the crossover decided to stick around. Or, it’s quite possible that the promotion for the episode – featuring a clash between Oliver Queen and Ra’s al Ghul, and revelations about Sara’s death – got more eyeballs tuning in.

In any event, the initial ratings – which can and will go up when other things are factored in – place Arrow at 3.04 million viewers and a 1.0 in the 18-49 demo.

UPDATE: Final overnight ratings are in, and Arrow went up to 3.06 million viewers and the demo went up to 1.1!

What did you think of “The Climb?” Do you think Oliver is gone for good? Talk about the episode on our forum!