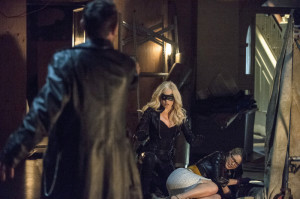 Bad guys are doing bad things, and the Clock King is involved, but no worries: The Arrow and the Black Canary are on the case!

Here is a preview clip for the next new episode of Arrow where this happens. It’s called “Time Of Death” and we should have some screencaps from this clip later tonight. But really, you all just wanted the video, right?

The clip features Stephen Amell as the Arrow, Caity Lotz as Black Canary, and Robert Knepper as William Tockman, the Clock King.

“Time Of Death” airs Wednesday, February 26 on The CW.

Official images from “Time Of Death” can be found here.