At the red carpet for the “Heroes & Aliens” panel at the 2017 PaleyFest, we were able to catch up with Arrow Executive Producer Wendy Mericle as well as “Oliver Queen” himself, Stephen Amell.

Stephen’s interview will be posted within the next day or two, but first, we are going to Mericle to find out what’s coming up for Felicity Smoak and Thea Queen… and while we’re at it, GATV’s Craig Byrne tried to get information about the “fathers” in the upcoming episode “Honor Thy Fathers.”

First, we spoke about Felicity’s involvement with Helix. “She’s getting in deep,” Mericle says. “She’s gone down the rabbit hole, and she’s going to find out that like Anonymous, and like Wikileaks, and like a lot of the real-world inspirations for all this, there are some moral gray areas in this world, and she’s going to have some significant challenges trying to navigate those,” she promises. 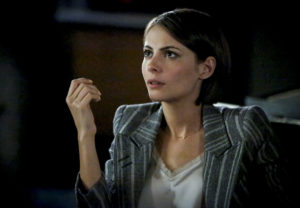 As for the out-of-town Thea, she is indeed coming back.

“She was really upset when she left, and she’s going to get called back in a [time] that she’s not done figuring out the challenges she’s facing. She’s still worried she’s going to become Moira,” Mericle explains.

“I love Thea,” Mericle continues. “I love her character. She’s the daughter of sociopaths… how often can you say that? She started out as this teenage girl who was in private school, had a lot of money, and partied all the time, and now she’s this woman who works in the Mayor’s office and is really good at her job, but she has this kind of darkness that she is constantly grappling with. She’s going to be trying to understand her heritage, understand her family, and understand where she comes from, and I think that’s something that every twenty-something can relate to.”

And speaking of families… who are the “fathers” referenced in the upcoming episode titled “Honor Thy Fathers?”

Stay tuned to GreenArrowTV for more interviews from PaleyFest in the coming days! A new Arrow airs Wednesday, March 22 on The CW… see some pictures here!