Last week, GreenArrowTV was one of several outlets to visit the Vancouver sets of Arrow where we were able to interview several members of the show’s cast. The night we spoke to the Arrow cast was the same night “Human Target” hit the air, so of course there were a lot of questions that we had for Stephen Amell about the episode’s events – starting with whether or not we’ll be seeing Christopher Chance a little bit more in the flashbacks.

“I don’t know about the backstory,” Amell admitted, before talking about his enjoyment of the Season 5 flashback story. “I’m really enjoying the flashbacks this year, but a lot is going to have to happen, because we have a veritable checklist of things that have to happen before we theoretically get to the events of [episode] 101. I don’t know if the Human Target’s going to continue to through the backstory, because we have a lot of things to focus on, but I would love to have Wil [Traval] back in our present day. I thought he was a really interesting element to the show. I know that it’s a very specific — gimmick is the wrong word, but ‘set of skills’ may be better — but I thought he was great. I thought he was cool. And I really enjoyed – and I spoke with the producers about this – I really enjoyed the way that Oliver got to behave when he was being played by the Human Target, because it was a little bit more of a fun, jovial, wisecracking version of the character, and I like that version of the character,” Stephen said.

Of course, “Human Target” was also full of bombshells, and in this episode specifically, Oliver learned about Felicity’s relationship with Detective Billy Malone. How is he feeling about that, really? 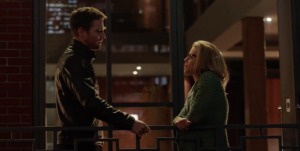 “I thought that Oliver was fine, if not slightly confused that Felicity didn’t tell him that she was dating someone,” Stephen said. “I wasn’t actually a huge fan of the idea that she wouldn’t say something because of all of the reasons that their relationship fell apart last year, which was secrets being kept. To me, when I played those scenes, it was just like ‘A, we work together, so if you are keeping anything from me — anything — why? Is it because you don’t trust me, and if you don’t trust me, is that a problem?’ So, to me, it was really about getting to the source of what her issue was. It was less about Oliver and it was more about ‘are we okay? Are we good?’ Because now it’s not just you and me down there. We have John back in full. We have Thea operating the political axis of Star City. And we have these new recruits that look to us for guidance, so let’s make sure that as the theoretical leaders of the team, that we’re on the same page’.” 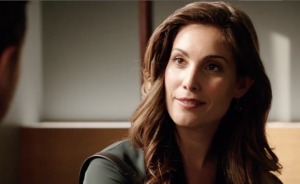 The other big bombshell within “Human Target” is that reporter Susan Williams (Carly Pope) has gotten tipped off that Oliver didn’t spend all five years on that island. What has it been like to play those scenes?

“It hasn’t really happened yet, but where they go is interesting,” Stephen teased. “Susan appears to be up to no good, but in reality, she’s just following a very interesting story. I mean, the Mayor of the town where she is a news reporter was clearly not on an island for five consecutive years, which, by the way, I feel like it’s about time we did that. I mean, I always think back to the first Nolan Batman where I think it’s Ra’s al Ghul says ‘the world is too small a place for someone like Bruce Wayne to disappear.’ Theoretically, Oliver Queen… even if he wasn’t as famous, and he wasn’t, he did ‘perish’ in a very famous incident within our story, so I always thought when he was in Hong Kong that someone would stop him and be like ‘you look like Oliver Queen!’ But no. So I’m glad that it’s happening.”

“Hopefully it’s building to something that we’ve talked about doing on the show for a while,” Stephen continued. “We’ve had, in separate instances, with the first person being Slade, who discover Oliver’s secret or a secret that he is keeping if not the secret, and they threaten him with it,” Stephen continued. “I think that it would be interesting, if we go back to that storyline of her having information, that maybe she threatens him with it, but maybe his counter is different than what we’ve seen before. I also think that it would be most interesting if Susan Williams wasn’t just necessarily a spy in the weeds, in the way that there was no redeeming quality in Isabel Rochev. She was there to play Oliver from the beginning. So, maybe Susan Williams is learning something, but concurrently, maybe her relationship with Oliver will become dynamic and she won’t want to do what she did to Thea in the earlier part of the season.”

Arrow airs Wednesday nights at 8PM on The CW. Keep an eye on our Twitter feed for more interviews as they become available and be sure to check out our YouTube channel as we will have some video soon!