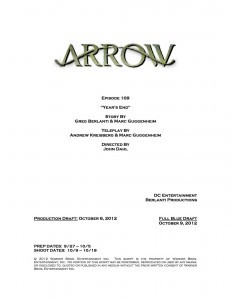 There’s a lot going on right now, what with Arrow premiering TONIGHT at 8PM (ET) on The CW… but that hasn’t stopped Executive Producer Marc Guggenheim from posting the title page to Episode 9 of Arrow.

Episode 9 is the last episode of Arrow to air in 2012 and is said to be a bit of a mid-season finale in the Battlestar Galactica vein. With Andrew Kreisberg being a Doctor Who fan, might he give us midseason drama on the same level Steven Moffat gave us with Doctor Who this year?

Read more Arrow spoilers on the GreenArrowTV Spoilers Page! (I’ll add the Episode 9 title there in a few if it’s not there by the time you read this… with the show premiering tonight, I’ve got some work to do in the meantime…)