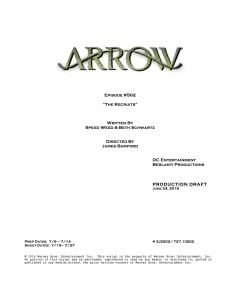 The title and credits for the second episode of Arrow Season 5 have been revealed by Executive Producer Marc Guggenheim.

The episode is called “The Recruits” and it is written by Speed Weed & Beth Schwartz. James Bamford is the director — he’s also directing the season premiere, so we know the first two episodes of Season 5 will be action-packed.

Our guess is that the episode will air on October 12. Arrow Season 5 premieres October 5 on The CW.