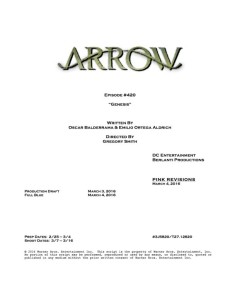 Arrow Executive Producer Marc Guggenheim has revealed the title and credits for the 20th episode of Arrow Season 4.

Episode #4.20 is written by Speed Weed and directed by Kevin Smith… no, we’re kidding.

The title of the episode is “Genesis.”