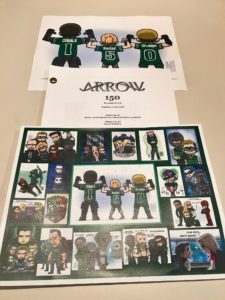 Executive Producer Beth Schwartz has announced the title and credits for the 150th episode of Arrow, with a title page surrounded by the artwork of Lord Mesa.

Episode 150 — the 12th episode of Arrow Season 7 — is called “Emerald Archer.” The episode is written by Marc Guggenheim & Emilio Ortega Aldrich and it will be directed by Glen Winter making his first trip back to Arrow in quite a while.