We’re getting even closer to the big 100th episode of Arrow airing Wednesday night, November 30 on The CW, and here at GreenArrowTV we have more interviews from the Arrow Episode 100 “Green Carpet” event to share with you!

Right now, the spotlight falls on the strength behind Team Arrow — David Ramsey, who plays John Diggle on the series.

You can see the interview in text form below; if video is more your thing, scroll down. 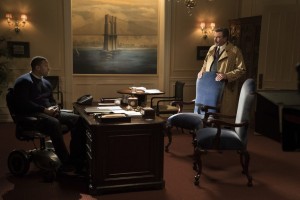 GREENARROWTV’s CRAIG BYRNE: Was it intimidating to jump from a steady gig on Blue Bloods into a show like Arrow?

DAVID RAMSEY: Yes! On Blue Bloods, I just sit down behind a desk with Tom Selleck. There’s no jumping off buildings, no zip-lining, no rolling on the ground, there’s no martial arts… so yeah. It’s a lot more challenging… both are challenging, but it’s a lot more challenging, I would say, on Arrow. But it’s been great, man. This has been a great ride. I met Andrew and Greg, they knew about my work on Blue Bloods, they really liked me for the character. Andrew told me — he said “David, you have nothing to do in the pilot, practically, but you become very important to the development of our main guy, and even in your own way, he becomes a very, very well fleshed out character. Do you want to do it?” And I was like “Yes!” And here we are, five years later. 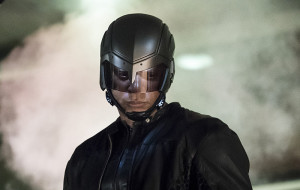 Team Arrow is missing something right now without Diggle being part of the group. How do the dynamics change when he comes back? (Note: This interview was obviously conducted before Diggle returned to the fold earlier this season.)

You have to have a Team Arrow with Diggle, right? He does come back, and the dynamic changes because you have a new group of guys, and I think he’s going to have some pointed questions about that, bringing in new recruits that are semi-trained, like he did with Laurel Lance, who we lost in the field. I think he’s going to have some very, very interesting thoughts about that. 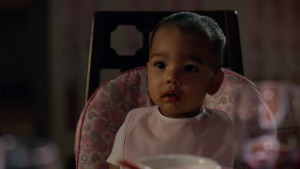 What was your reaction when you found out what Flashpoint did to baby Sara?

Diggle can have two kids! You don’t have to take one! But I think it’s great for character development. I think is gives Diggle someplace to do. But I think you’ll be very surprised by Diggle’s reaction, because it does come out. Secrets don’t stay secrets for long on this show. I think that when he finds out, the reaction’s going to be a lot more compassionate than you might think. 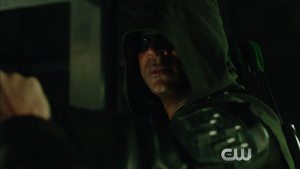 It sounds like Episode 100 goes back to the past of the show a bit. What part of John Diggle’s past might be explored in the episode?

What brought him to the team in the first place. His sense of purpose, his sense of community, his sense of duty… I think that’s where he feels the strongest. That’s why he went back to the military at the end of Season 4. I think we get a clear understanding as to what kind of guy he is this season, and really what his legacy is. I don’t think he knows yet, but I think by the end of the season he’ll know.

You can see video of the interview below. Be sure to keep coming back for more interviews between now and Wednesday night!