Arrow Episode 100: Is Colin Donnell Back? Plus, Stephen Amell Reveals Who He Was Most Excited To Work With Again

The upcoming 100th episode of Arrow brings back some favorites from times past, including Susanna Thompson (Moira), Katie Cassidy (Laurel), Jamey Sheridan (Robert Queen), John Barrowman (Malcolm), and even Deathstroke in some form… but many of us were wondering, beyond Raisa the maid*, will Oliver Queen’s best friend Tommy, as played by Colin Donnell, be back for Episode 100? 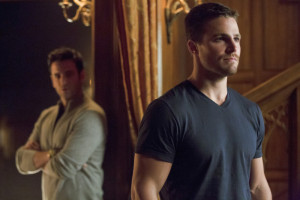 Sadly, according to Stephen Amell at the Arrow 100th episode green carpet, Colin is not back – but there is a “nice nod” to the character, which implies to us that he will be represented.

“There’s a nice nod to Colin, but he’s literally a series regular on another show,” Stephen told us. “We tried to make it work, but we couldn’t make it work.”

So of those who were able to return, was there one that brought Stephen particular joy to work with again? 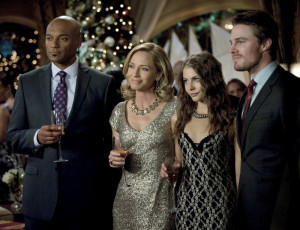 * Spoiler: GreenArrowTV has learned that, alas, Raisa the maid, as played by Kathleen Gati, is not back for Episode 100. Here’s hoping for Episode 200, then!