The final season premiere of Arrow titled “Starling City” has now aired, and for a post-mortem, we were part of a group of journalists who spoke with Showrunner/Executive Producer Beth Schwartz about the season premiere… and beyond. Are you ready for some highlights? Here goes:

Be warned spoilers for the Arrow Season 8 premiere “Starling City” are being discussed within!

Hard-traveling heroes: “In our upcoming episodes, we visit places that we’ve gone to in our previous seasons,” Beth told the group. “So they’ll take place in different locations. I think we only have  one or two episodes actually in Star City,” she reveals, though she clarifies that aside from the crossover, the season premiere is the only one that took place on another Earth… and yes, they did communicate with The Flash to be sure it would be okay to destroy that world.

What was behind the decision to leave Thea dead on Earth-2? “In part of breaking the premiere, we just talked about where every character would be if Oliver didn’t come back,” Beth said. “We talked about the pilot, and when Oliver came back, and she was a totally different sister than Oliver remembered leaving. She was really, heavily into drugs, and he saved her on her birthday in Season 1. Realistically, if he wasn’t there that she probably would have died. So that was the decision for this episode.” Willa Holland and Thea will be back in the third episode of Arrow Season 8, though. “We love Willa, and there’s no way we could have had a final season without her. So that was a no-brainer to bring her back,” Beth said. 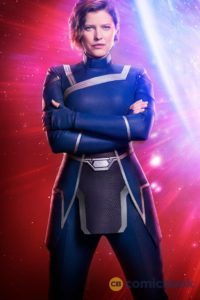 John Diggle’s family understands. “Diggle is always there for Oliver, and his family, specifically Lyla, has understood that throughout the seasons that you can’t separate those two,” Beth said. As for the “Harbinger” of Lyla Michaels, the show will address that issue — and whether or not she’s been working for the Monitor all along — pretty fast. “I think in Episode 3,” the usually spoiler-resistant Schwartz revealed.

Is Oliver annoyed with the Monitor’s obfuscation? “He gets fed up and he confronts him…soon,” Beth teased.

About Oliver’s moment with Moira in the season premiere: “Moira Queen is such a dynamic character and her death still haunts all of us I think, especially Oliver, and I think that what we like the most about having her in the premiere is he now has his own children,” Beth explained. “So to have his mother give him advice about motherhood to him, now he’s a father, was just such a perfect moment. I tear up every time I see the scene between the two of them, because they’re so great together, and yeah, it was to give him some closure as well to say he’s sorry for what happened to her.”

Will any of the characters who came back for this episode be back in other episodes? “Some of them will return,” Beth answered.

There was a Laurel/Tommy moment at Verdant that was cut for time. “The premiere, per usual, was a lot longer than we could air, so hopefully we’ll get those in the DVDs,” Beth said.

On having Josh Segarra back as a different Green Arrow… with a little bit of a sense of humor: “He definitely brought light to that characte,” Beth said. “I I don’t know if any of you watch Orange is the New Black, but he was so funny on that show.”

“I think he really brought more the the comedic side, sort of making fun of himself a little bit, and just having the dynamic between Oliver… him not knowing, you know, who he was in Earth One just made it that much more fun for Stephen to play off of, and the two of them obviously have amazing chemistry. That’s why we all love Season 5. I don’t remember when we made the decision that he was going to be the Green Arrow. It felt like it just always made sense,” Beth continued.

Is there an Earth where Baby Sara still exists? “We are definitely making up for that this season, so, keep your eyes open for it,” Schwartz answered. We’re not sure if she was joking about that last one.

Arrow Season 8 airs Tuesday nights at 9PM ET/PT on The CW. Come by our Arrow forum to talk about the season premiere!