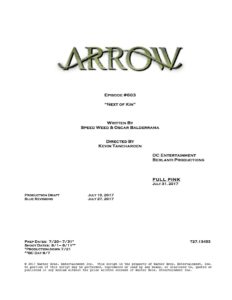 Executive Producer Marc Guggenheim has revealed the title for the third episode of Arrow Season 6.

The third episode is called “Next of Kin” and it is written by Speed Weed & Oscar Balderrama. Directing the episode is Kevin Tancharoen.

“Next of Kin” – so, let’s predict it: They totally go and find Samantha’s family after she’s gone boom, right?

(And since we apparently were knee-deep in Comic-Con when the news came out, Episode #6.2 is “Tribute” and it’s a story from Adam Schwartz with a teleplay by Beth Schwartz & Marc Guggenheim. Laura Belsey is directing that one.)