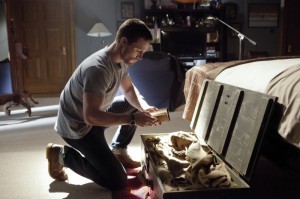 Since the series premiere of Arrow is such a big deal, BOTH of our reviewers, Matt Tucker and Derek B. Gayle, will be covering this one!

Summary: Arrow kicks off with intriguing set-up for the future plots and character arcs, and contains decent performances and phenomenal action sequences. However, it’s clear that there are still some kinks to work out.

In the premiere episode, wealthy playboy Oliver Queen dawns the identity of Green Arrow, after returning from five nightmarish years stranded on an island. He begins his mission to enact justice on men who, according to his father’s list, have driven Starling City into the dumps.

Arrow’s first episode is a hard one to judge. As one episode, it’s a bit of a mixed bag—but it’s one that excels at setting up pieces that can carry the series for years to come. In addition to the big reveals in the present, we have more than a season’s worth of material to explore just from the island. How did Oliver learn archery, martial arts, and how to build arrows that hack into bank accounts with WiFi? He couldn’t do it on his own, so in the context of this one episode, it feels like a plot hole. But it would be unfair to say that, because it’s clear that the show purposefully left a huge gap of his island experiences completely untouched. And presumably, that’s what’s going to carry the show for quite a while. So most of what we get really depends on where the series goes from here.

In any case, something the show does right from the start is keep the focus squarely on Oliver. This take on him is more hardened than other ways we’ve seen him portrayed, in part because it’s early in his career, but also because the island itself is something of an enigma. Most variations of his origin usually treat the island as hurdle that pushes him into superheroics, but Arrow seems to focus on the psychological torment it causes him. He didn’t just come back from the island with cool archery skills, he came back with a profoundly fractured psyche. There are some obvious examples of this, like when he’s sleeping next to the open window having nightmares about the island. But even smaller (but still important) moments, like his anger at the random passerby being gunned down, are indicative of his attitude. Oliver does kill people, but only when it’s necessary and the person deserves it, in his eyes. While I tend to respect the no-kill policies of Superman, Batman, etc., having it not be so black and white is a more realistic take on superhero/vigilante ideals. It opens up a whole can of worms about Oliver’s state of mind that I really hope they explore. After all, what kind of impact would making those decisions have on the man who makes them?

One of the downsides of this darker take on Oliver, though, is that while Stephen Amell is adept at portraying the brooding, darker side of Oliver without sacrificing charisma and sensitivity, there’s a noticeable lack of humor from him and in the show overall. Granted, it makes sense for Oliver to not be the snarker Green Arrow is in other iterations, but it’s not good to have a main character who isn’t much fun to be around. Like I said, Amell is really strong in the role, but it would be nice to see his comedic chops in action. There probably wasn’t a place for Green Arrow to crack jokes here, sure, but it would be nice to see some lighter moments in general as the show gets more comfortable in its own skin.

So much time was spent with Oliver that we didn’t really get a substantial amount fleshed out for our ensemble cast, though we did get some tidbits of what’s to come for them. Katie Cassidy is no stranger to playing feisty women, and she struck the right balance of warmth and strength for Laurel. Her District Attorney job pretty much guarantees she’ll have some plotlines beyond just being the object of Oliver’s affections, which is a good sign. Colin Donnell as Tommy initially leaned a little far on the “annoying comic relief” side, but his presence in the second half as a subtle, future-antagonist made up for it. Willa Holland as Thea is already set up as an obvious goal for Oliver—to get her back and the straight and narrow—but her emotional rant to him about how she turned out was a great moment (not to mention, you know, that whole Speedy thing.) And what Oliver is missing the snark, Detective Quentin Lance makes up for it; Paul Blackthorne has a great presence, and has the potential to be a breakout character because of it. John Ramsey as Diggle, however, is a bit of a wild card.

The last act and a half of the episode is very strong, showcasing what the show will probably be like week-to-week with Green Arrow in action, nestled closely with shocking reveals and character beats. The reveal of Moira as a villain and Robert’s murder/suicide justifies the changes to the mythology in favor of a complex, Shakespearean story of familial betrayal. And wow, are the fight scenes stellar. Shows like Buffy and Smallville got away with campy or lackluster fight sequences because of budget constraints, but Arrow seems to pump ample time and care into crafting them. The only thing I wasn’t completely thrilled with was certain parts of Oliver’s parkour chase sequence, which goes a little too far at points, but not by much. Any action sequence with him in his Arrow costume is a work of art.

However, something that doesn’t quite work for the pilot that hopefully gets toned down is Oliver’s narration. Voiceovers work exceptionally well in comic books, where sound isn’t a factor in building atmosphere. In television and film, though, it has to be crafted very carefully and used sparingly. Unfortunately, it doesn’t seem too necessary in Arrow; Oliver’s narration doesn’t do much more than spell out what could be said just as easily in the silence with Amell’s facial expressions. The actual written narration is also somewhat overwrought and little too on-the-nose. It doesn’t do Amell’s acting nor the cinematography justice, and Amell’s narration skills aren’t nearly as refined as his significantly stronger physicality.

But make no mistake, the flaws are superficial ones. Many of the weaker elements (like the voiceover or lack of humor) will likely work themselves out as the series progresses, but the story it sets in motion is what’s important. What makes Arrow’s pilot strong is that it’s intent on having a trajectory and momentum. Each character serves a purpose, however minor, and has some kind of conflict intertwined with Oliver that he/she will have to overcome. It didn’t tell a wild superhero tale or an epic origin story, it gave us a series of teasers that will unfold throughout the show, wrapped neatly around Oliver’s first arc. It means we don’t get a perfect individual episode, but we do get the beginning of something with lots of potential. Even if the pilot didn’t completely blow you away, it’s clear that the show as a whole just might, if it delivers on that promise.