A Better Idea for the Next Arrow Spinoff

The Television Critics Association press tour has been in full effect over the weekend with the CW making their presentation yesterday, hot on the heels of their announcement that they’ve renewed all 8 of their fall shows for another season. Amongst the presentation, CW network president Mark Pedowitz revealed that the are in the preliminary stages of exploring another spinoff set in the superhero universe of its series Arrow and The Flash. 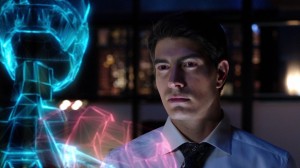 Many outlets jumped the gun in announcing that a show built around the character of Ray Palmer and his soon to be birthed alter-ego the Atom, featured on this season of Arrow and superbly played by Brandon Routh, would be the likely series. Comments from Routh at a panel discussion of the various heroes and villains of the ever-burgeoning DCwU seemed to offer support to that idea.

However, Pedowitz merely stated that an “Atom” show was a possibility. It is not necessarily a probabilty that it will be the show, or that they will move forward with another show at all. Being limited to only 10 hours of programming in a week doesn’t leave much real estate. Pedowitz is also on record for having passed on pursuing the Supergirl series that is now set up at parent network CBS because he didn’t want the CW to be locked into one specific genre.

With the CW’s plan to push into year-round new programming, and the astounding popularity of its two superhero series, a third seems almost an inevitability. There are a number of heroes emerging in this established world, including the nuclear-powered Firestorm (Robbie Amell), the newly masked Black Canary (Katie Cassidy), and Palmer’s pint-sized powerhouse, as well as some existing faves like Roy Harper’s Arsenal (Colton Haynes). Even the just-announced Vixen animated series, which is set in the DCwU, is said to offer the potential for a live-action appearance of the eponymous heroine on one or both of The Flash and Arrow. Any one of which could front a series.

Yet, perhaps, they are missing a better idea. Why not build a show around many of these heroes?

Though, before thinking about it as a team show — TV’s live-action version of the Justice League — I have an even stronger concept.

Go with an anthology series.

An anthology series, for those unfamiliar, is one that features stories of a similar theme or genre but aren’t necessarily a connected narrative. They can have stories that last a single episode or perhaps run a 3 or 4-episode arc. The Twilight Zone or The Outer Limits are good examples. As are True Detective, Fargo, and American Horror Story, all of which feature an independent story for each season.

Imagine a series where you can have a 3-episode Atom arc, followed by a one-off Firestorm story. Imagine a series where you could have Arsenal and Vixen team up, or one where Black Canary can have her own arc without disrupting the narrative of Arrow. How ’bout exploring Ted Grant’s Wildcat vigilante days before the Arrow ever set foot in Starling City? These could all still be in-continuity but allow them to tell stories they normally wouldn’t be able to on the other two main series.

Even more, imagine a series that was able to introduce a number of new DC heroes to live-action without the burden of trying to make them work into the arcs on The Flash or Arrow. More important, to test out their interpretations without having to go through the pilot process or creating a whole series, seeing which ones stick and which don’t connect with the audience without having to invest far too much time and money.

Imagine a series that could offer episodes or arcs strictly from the villain’s point of view. Or one that allows them to create all new heroes and villains that can be as vital and enduring as a Harley Quinn. One that gets to air proof of concept that a female-fronted superhero series can succeed. The possibilities are astounding.

Justice League and its sequel series, Justice League Unlimited, as well as Batman: The Brave and the Bold, were successful anthology series on the animated side of the building. The concept could do even better in live-action, a sandbox that lets them play in a way that committing to a series about one single hero doesn’t.

The CW would be wise to consider another series set in the Arrow-verse. It would be even more wise to think outside the box and offer one that let’s us truly explore the extent of this thriving world.