Who Is Prometheus? Wendy Mericle & [Redacted] Discuss The Revelation 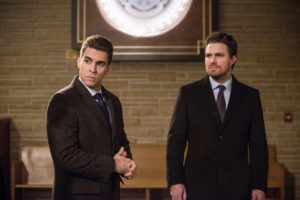 Josh Segarra (Adrian Chase) was in New York when getting on the phone with Wendy Mericle and Marc Guggenheim, who had news for him about his character. “I thought I was just going to talk to them the way I’ve spoken to a couple directors or executive producers along the way, where you talk about this part, and they may go a different way or what you decided, it ended up being something different,” he recalled. “So I’m going into it just kind of thinking that they’re going to tell me what Vancouver is like, or what the weather is like, and they start talking to me about this character, and that there’s a history of Big Bads on our show. I had watched the show a little bit before, and I love Neal McDonough, so I watched a lot of Damien Darhk actually, and of course I became a fan of everybody else. So when they started describing him, like ‘you’re going to be the Big Bad of the season and you’re going to play this guy,’ and they described Prometheus to me,” Segarra recalled.

“So I go home, and I’m celebrating with my family, and like ‘oh, man! I’m so excited to go work on Arrow, and it will be such a great thing,’ and my buddies are asking me who my part is, and I’m telling them “oh, I’m playing this guy, I don’t even know too much about him, but who knows. It’ll be really fun, right?’ And then they announced Adrian Chase, Vigilante. And I’m like ‘oh my gosh! I’m playing Vigilante!’ So now, I get to Vancouver and I think I’m playing this guy Vigilante because that’s who everybody thought, right? I started reading Vigilante comics, and I’m reading about Chase, and reading all about the history of these guys, and I get to work and I’m talking to Marc and I’m like ‘Marc! I’m really doing my research! I’m really being studious about the Vigilante guy’ and he’s like ‘What do you mean?’ I’m like ‘oh, dude, you know. We announced it, finally! So I’m going to be a great Adrian Chase – Vigilante.’ He was like ‘That’s not who you’re playing’,” Segarra remembered.

Getting to play multiple layers of Adrian is exciting for Josh Segarra. “Whenever you’re like starting this process of like building a character, not to get all nerdy and actory and talk about school, but whenever you get that process, especially if you know he’s gonna be a ‘bad guy,’ you always wanna find the good in them, right? You wanna find what made that person. Because bad people don’t think that they’re bad, you know? There’s a justification behind it. So what was the blessing in this was that they gave me both sides literally on paper, you know? My job was knowing that, by the end of this journey, by the end of this season, I want to have taken you guys on the journey with me. So, I was making sure that, along the way, I wanted to track this guy. You can’t come out the gate as Adrian Chase as this like pissed off killer, right? This tortured soul. You can’t come out of the gates like that. So, I remember, at first, some of my close buddies who are the only ones I let talk to me like this, were like, ‘Yo, man, What are you doing up there, bro? Why are you smiling so much?’ And I remember just being like, ‘Ah, that’s good.’ Because I wanted to start somewhere,” Josh explained.

“With Chase, there was that part where you had to see him getting close to Oliver, you had to show why they trusted each other. You wanna make sure you do that within the confines which you’re given, which, in our case, in this form of art, it’s the episodes. So, each episode, I wanted to make sure to establish that this guy does get close to Oliver. Oliver does let him in, you know, and Oliver doesn’t let many people in. And you had to show why he earns Oliver’s respect, and that’s what I wanted to make sure of on the Chase side,” he continued.

“On the Prometheus side, it’s been fun because I get to put that mask on and just revert back to being an eight-year-old boy, running through my backyard, making movies with my brother and my sister and my best buddies. There are sometimes where, you guys won’t know this, but, behind that mask, I am screaming my face off sometimes. And I am just living out every super  dream that I’ve had ever had. I’m very, very excited,” he said.

Arrow airs Wednesday nights at 8PM ET/PT on The CW. Come by our Arrow forum to discuss this big reveal and tonight’s episode!