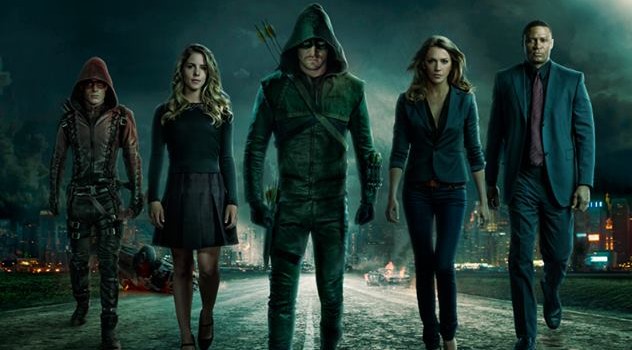 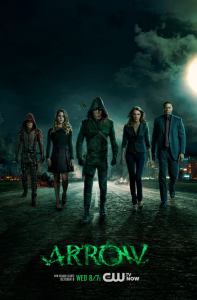 Oh, wait. Those lyrics refer to the wrong show. Even so, there’s no denying that Arrow Season 3 has had its own road and journey to overcome, and multiple characters this season have been taking steps toward greater destinies – whether it is Laurel on her way to becoming Black Canary, Oliver learning how to have a personal life and a heroic one, Diggle balancing life as a father and a hero, or Roy finding a place as part of Team Arrow’s arsenal. And now, the whole team will face an upheaval as Oliver Queen might not be around to be their anchor.

As Arrow Season 3’s return is exactly a week away, Team GATV has reunited to discuss what we’ve seen so far this season… and then, before the show comes back next Wednesday, we’ll be at it for more, talking about what we expect later in Season 3. Participating in this roundtable are KSiteTV & GreenArrowTV webmaster Craig Byrne, Arrow reviewers Matt Tucker and Derek B. Gayle, and GreenArrowTV contributor & KSiteTV reviewer Stephanie Hall.

Since this post is VERY long, we’ve split it up in multiple pages.

How is Season 3 stacking up so far compared to previous seasons of the series?

STEPHANIE HALL: So far, season three has been an improvement over season one, but not as solid as season two. There were huge moments in the first part of season two – Moira’s trial, Barry’s visit, Sara’s alive, Malcolm’s alive, Slade’s alive (pretty much everyone except Tommy is alive) – but the big aspects of season three – Thea’s training, Laurel’s training, Felicity’s backstory, the introduction of Ra’s – haven’t been nearly as shocking or exciting to me. I left Sara’s death out of the list because that was certainly shocking … it’s still a sore subject. But regardless, I’m extremely excited for the second half of the season, so these first nine episodes haven’t in any way lessened my respect for the series. 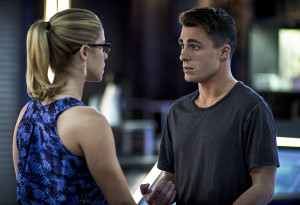 CRAIG BYRNE: While Season 3 has definitely had its moments, Season 2 is going to be hard to top for me, and I think that one might still be my favorite. I’m not sure I’m as invested as I should be in the flashback, and at midseason, I’m filled more with question marks than anticipation.

A big part of that, I think, is that at midseason last year, we were teased with the notion that Slade Wilson was in present day, and Manu Bennett as Slade scared me. Even though Ra’s al Ghul is one of the biggest “bad-asses” from DC Comics, so far, he hasn’t scared me much.

DEREK B. GAYLE: I’m hoping it will work better in retrospect, because as it stands, I’ve been somewhat disappointed. It’s weird, because I’ve enjoyed the show week-to-week — it’s not like the episodes themselves are necessarily low quality. It’s that they haven’t quite clicked as a long form narrative, at least not as well as the last two seasons. I mentioned this in one of the reviews, but a clear indication of the disjointedness is how nearly every episode ended with a “shocker” that was merely a preview of the next episode. That’d be fine if those moments were natural progressions of the story that was just told, but most of the time it was out of nowhere. Throwing in Cupid in “Guilty” and Captain Boomerang in “Draw Back Your Bow,” for example, were tacked on to the end of those episodes as if they were post-credits tags. That’s not really a problem in and of itself, but they seemed to be happening because the episode would otherwise just stop or end on a whimper. There wasn’t much momentum outside of the episodic plots, and the relentless momentum is what made the first two seasons work so well.

MATT TUCKER: I’ve been plenty vocal about the inconsistency of this season so far, especially coming off of an outstanding second frame. The second half of Season 1 rounded a corner and turned decidedly better than its first half, but I wasn’t one who necessary felt while watching it that it was as off or waffling in quality as much as others did. Watching the first part of Season 3, for me, feels like others’ impressions of the first part of Season 1.