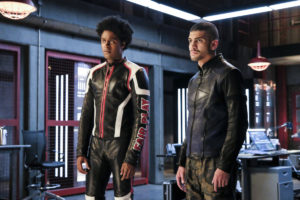 Did you sympathize with “New Team Arrow” at all?

CRAIG: I understand Rene being protective of his daughter. I understand Dinah was upset about Vince, even if the Vince character was about as appealing as having to watch a season of Valor. But… it went too far, and I felt that whenever anyone apologized, it was always an apology to NTA, and that didn’t sit well for me. Making matters worse, I feel like Dinah’s thirst for revenge for a part of the season kind of ruined the great character she was building to be… though it made her working side-by-side with Black Siren in the season finale so much more rewarding. Still, I never really was feeling it for NTA.

MATT: To a degree. I liked the new team more than most, I think. And it’s clear Oliver’s stubborn and stilted ways could be too oppressive and less considerate of everyone not just the new crew. But I also thought the whole team split was a bit of a tough sell because we hadn’t had quite the time invested to truly feel its impact. The mix of the two groups works, and I like the personalities of NTA.

STEPHANIE: I understood why they felt betrayed by OTA, but I didn’t sympathize enough with them to agree with their choice to split off. Instead of working through their trust issues and proving themselves, they just decided to take the easy route and peace out.

MELISSA: Whatever small sliver of empathy I might have been willing to extend to the NTA over their bruised feelings was swallowed up by their insufferable attitude and holier than thou behavior that started the second that they abandoned the city’s needs and put greater trust in the actual betrayer on Team Arrow than in the mentors and teammates that brought them into the fold and who had very good reasons for a very temporary intrusion into the B team’s privacy, reasons that served the greater good of the whole team.