In the process of doing interviews with the Arrow cast about what happens next after last week’s season premiere, EW’s Natalie Abrams asked several of them about what it was like to live to see another season, and she also got details from Stephen Amell about what will happen next now that Oliver’s secret is out in the open.

“I love the way that he handles it,” Stephen told the site about what’s coming next, with “Tribute” airing on Thursday night, October 19. “We end the first episode with people being like, ‘Oh God, look at this, this is a photo,’ and I was so pleasantly surprised to see the next episode,” he said.

“I come in and talk with the reporters, and one of the things that I’m enjoying doing as mayor this year, and Oliver as a character to a certain extent, is I’ve tried to up the charm factor a little bit,” Amell continued before teasing that something fun may happen in the scene. “He should be a little more comfortable in his shoes as a public figure. He steps in and deals with the press in a very, very relaxed way. Quentin says to him, ‘You seem pretty good with this,’ and Oliver’s like, ‘I’ve been here before.’ In that scene, we get to do the coolest name drop that we’ve ever done on the show, which I was really fired up about,” he teased. 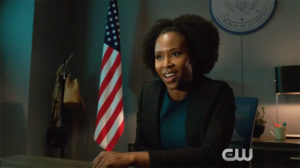 As for this name drop… any guesses? Perhaps he’s revealing who Michael Emerson will be playing? Guess we’ll have to watch and see.