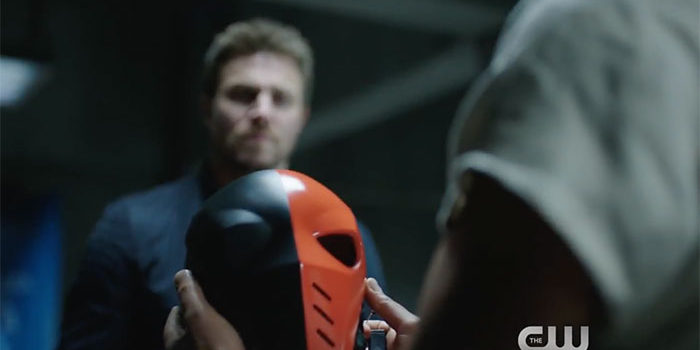 Speaking at the Heroes & Villains Fan Fest in Nashville this weekend, Stephen Amell dropped quite a few hints about what to expect in Arrow Season 6 — most notably, involving two characters from the show’s past.

For starters, a fan asked if we would ever see flashbacks to the journeys of characters like Slade Wilson and Sara Lance taking place between the island and Season 2 — and Stephen laid down one of the most exciting nuggets of info of the panel.

“I don’t know if we’re going to see flashbacks of Slade – we could,” Stephen answered. “I can report that Manu Bennett is back to being a part of the show, and I think we will see him multiple times this year, which is awesome.”

Guess that means he survived the island explosion? Hopefully this means we will actually get to see Slade’s search for his son Joe — something we think would’ve been fun for the upcoming DC streaming service Titans show, but we’ll take it here, too.

Following that, Stephen revealed that Oliver will again have a place to live — and there’s a bonus.

“Oliver has an apartment this year, and we have somebody returning to the show this year that we have not seen since Season 1,” Amell hinted.

That is an interesting concept, as it seems most Season 1 characters have been seen again since then, except for flashbacks. Helena, Walter Steele, even Laurel’s best friend Joanna all came back for return performances in later years.

Could it be Raisa the maid (Kathleen Gati)? Really. The mayor needs help, right? Or, more specifically, if William’s mother could have happened to go boom on the exploded Lian Yu, who would Oliver trust to take care of him, if not for one of the only people he himself connected with properly?

Or could it be McKenna Hall (Janina Gavankar)? Surely Star City needs some better law enforcement, especially after the mess Adrian Chase left behind at the SCPD.

Arrow Season 6 is now filming with Stephen Amell’s first day of shooting this week. The season starts Thursday, October 12 on The CW.