Stephen Amell On Olicity Dating Others: “Arrow Is So Many Things”

It’s the biggest and most heated divide for Arrow fandom: Some want Oliver and Felicity back together romantically, and others… don’t. Today at the Heroes & Villains Fan Fest in Atlanta, Georgia, someone who is in the pro-“Olicity” camp asked Stephen Amell straight-up if he thinks it is fair or genuine to expect fans to root for Oliver and Felicity dating other people. Here’s what he said: 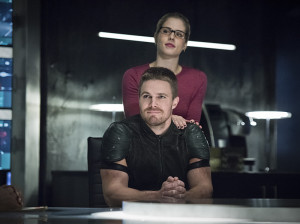 “Arrow is so many things, and if you let it just become about one thing, then you forget about the bigger picture. Does that make sense?” he continued. “So, I would say that Oliver and Felicity’s relationship as it pertains as to saving the city has always been more important than their relationship as it pertains to just are they-aren’t they, are they canoodling, are they not… so, for me, them functioning as a team right now and being honest with one another is super important, and whatever happens with romance, is whatever happens.”

You can watch video of the answer, courtesy of Olicityibelieve on Twitter, below.

About how the Olicity fandom is supposed to keep supporting the show… you’re not gonna like the answer… #HVFF #SheCouldBeDead pic.twitter.com/2zFGoSDmRg

Elsewhere in the panel, Stephen stressed that he is “very happy with the current season thus far” and revealed there’s a great scene between Rick Gonzalez (Rene/Wild Dog) and Paul Blackthorne (Quentin) on the way. We’ll be seeing a flashback sequence involving a new character. As for Felicity? In the later half of the season, there is a “really interesting thread” for Felicity, and Stephen says “I really think the fans are going to enjoy it.”