Spoiler: What Happened To Ray In The Arrow Cliffhanger? 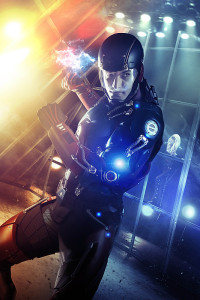 Spoilers for the Arrow Season 3 finale, “My Name Is Oliver Queen,” are within.

In the Season 3 finale of Arrow, one of the biggest cliffhangers that really left fans wondering was the sudden “boom” inside of Palmer Technologies. What happened to Ray Palmer (Brandon Routh) there?

Would you believe we don’t have to wait until October for the answer?

Yesterday, The CW released a trailer for their new show Legends of Tomorrow, featuring a certain rich guy who dresses like Iron Man but looks like he could have been Superman in another life. Legends is a spinoff from Arrow and Flash, and so, characters like Oliver Queen/The Arrow do make appearances.

In any event, the Legends trailer reveals the fate of Ray Palmer, if you really want to know what happened when he went boom. Oh yeah, and another Arrow favorite makes a return… and we learn about how that happens.

You can find the trailer here.