Comic-Con roundtable interview with John Barrowman of The CW's Arrow 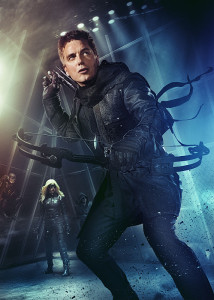 We’re not done sharing Comic-Con Arrow interviews yet… and there’s even one more to come after this one.

Today, the spotlight falls on John Barrowman, who is so excited that Malcolm is the new Ra’s al Ghul that he has his own Demon’s Head ring. And, hopefully, doing the interview isn’t as torturous as it was to be on Ra’s bad side last season (see above).

Among other things, we tried to find out if Malcolm has anything to do with Sara Lance’s resurrection next year. And, of course, he wouldn’t tell us much.

“Like the others, I go into the meetings, and production meetings, and I don’t like to know what’s going to happen, because I like to be surprised when I get the script, ’cause I’m also a nerd and a geek myself, so I enjoy that kind of thing,” Barrowman explained. “Also, it’s the challenge, for me, to go ‘ooh! That’s what I’m doing now’ and not have to make that work, and that makes it fun rather than knowing what’s going to happen. Because if you know what’s going to happen, sometimes you play things a little differently, whereas if you don’t know, you play from what it is right there and then, and it’s more spontaneous for the audience. All I can say is that we know she is alive — she’ll be back, obviously, because of Legends — but how she is brought back to life, that will be the interesting part. I would like to think that Malcolm has a little bit of a hand in bringing her back.”

In addition to that subject, Barrowman talked about his role interacting with Team Arrow, his reaction to Thea putting on a Speedy costume, his Arrow filming schedule, the challenges of maintaining his position as Ra’s al Ghul (and he explains the distinction between pronunciations of the name) and more. Oh, and there’s a bit where an actor from The Flash who distracts Barrowman in the middle of the interview…