From the very first episode, Arrow stood out with fantastic action sequences and stunt beyond what you can usually find on television, and a big part of what made it that way was fight coordinator James Bamford. Bamford was also one of the first members of the Arrow crew to interact with fans via Twitter, and had quickly become a favorite to interact with.

Tonight’s episode of Arrow, titled “Brotherhood,” was directed by “Bam Bam” himself, garnering public praise from Stephen Amell as the actor saw the first cut. We spoke with James Bamford recently at the Vancouver set of Arrow for some insight on his first time directing a full episode of the show.

“I have directed Second Units and I have directed action before, but this was my first time directing a full episode of television, so in my mind, my challenges were directing actors outside of just action, and performance of emotional content of the scene, and that sort of thing, but having been an actor myself back in the day, it was pretty natural, actually, and the performances I got out of our cast were just amazing,” Bamford said. “There was nothing I asked of them that they wouldn’t do.” 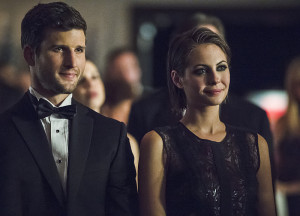 The earliest scene shot by Bamford for the episode involved an actor that he has worked with fairly extensively on fights in recent years. “My first scene was with Willa [Holland] and another, newer cast member, and they just made me feel like it was home. From then on, continually, in every scene we shot, I was just like ‘I’m home’,” he said.

On the action side, Bamford has always spoken with the show’s producers and seen where the actor takes a role on what kind of fight style the character might have. Physical type might also dictate the way in which a character might fight. This insight surely also helped with creating a rapport with the actors to direct the show.

It should probably be no surprise that tonight’s “Brotherhood” certainly won’t disappoint action-wise. “I’m assuming that’s what’s expected out of my episode, and everybody was joking, like, ‘oh! When you direct your episode, wait until you get your episode! There will be no action in it, or it’ll be a love scene or something!’ I was halfway thinking that that’s what it was going to be! It would be Felicity and Oliver making out, like, the whole episode…. that’s not the case,” he recalls. “I was kind of hoping for that, though… that would have been a different sort of a challenge.”

Bamford also credited his team for helping make the action in his directing debut work. “My assistant Curtis and our other stunt coordinator Eli really stepped up. The difference with me directing as to being stunt coordinator, I can ask for very specific action, and I designed the shots, and one of the shots you’ll see, I’ve been waiting to do for about twenty years, and now I got to put it in my own episode,” he enthuses. “There’s a shot and a fight designed around each other… it’s a continuous shot that goes on for a while. It may not make it to its fullest length form within the episode because we’re constrained by broadcast time and whatnot, but it’s something that we’re all very proud of, and something that you haven’t really seen on the show before.”

Arrow “Brotherhood” airs tonight at 8PM (ET/PT) on The CW.