Exclusive First Reveal: The Title Of The Arrow Season Finale Is… 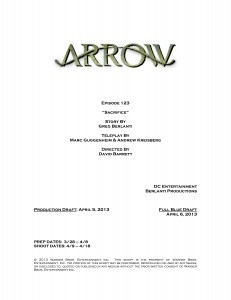 Here’s a treat to wake up sleepy Arrow fans on a lazy Sunday that doesn’t even include new episodes of Once Upon A Time, Family Guy, or The Walking Dead: The title for the Arrow Season 1 finale… are you ready?

The title for the Season 1 finale is “Sacrifice,” and the story comes from Greg Berlanti with a teleplay by Marc Guggenheim and Andrew Kreisberg. Directing the season finale, the 23rd episode of Arrow, is Dave Barrett.

So, now we know all 23 episode titles for Arrow Season 1. Surreal, isn’t it? Only three months or so until we know the first title for Season Two!

You can find more Arrow spoilers on our Arrow Spoilers Page.

What do you think this title means? Come talk about it on our Arrow forum!