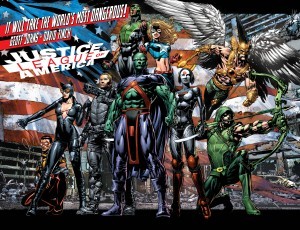 Although this site focuses mostly on the televised aspect of Green Arrow, some exciting news has come today from DC Comics courtesy of MTV Geek.

Many people have heard already about the new Justice League of America comic that is coming in February 2013. It’ll be coming from Geoff Johns (himself the co-writer of the upcoming Arrow episode “Muse Of Fire”) and artist David Finch, and it will feature the addition of Green Arrow to the team. That’s sure to be one of DC’s biggest launches for 2013, and they’re doing it with 52 (!!) variant covers — one for each state plus Washington D.C. and Puerto Rico. 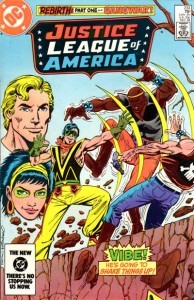 But that’s not all of the cool Arrow-related comics news. Jeff Lemire, who has done an amazing job with Animal Man and is responsible for one of my favorite Superboy runs, will be taking over the Green Arrow comic book series as writer with issue #17. Joining him on art is Andrea Sorrentino.

And then! (Yes, there’s an “and then!”) Arrow Executive Producer, writer, and one of the developers of the series Andrew Kreisberg is helming a new comic book series as writer — a series that may catch everyone by surprise: Vibe! Making Vibe cool is surely an intimidating task, but seeing what Kreisberg has done with Green Arrow and what he has done with his animated DCU work… it’s quite possible he can get the book shaking.

Look for these new comics in February.