Arrow Executive Producer Marc Guggenheim and ComicBook.com’s Russ Burlingame have teamed up with the idea to benefit two very important groups – Feeding America, which distributes food to the needy and funds to local food banks around the country, and the Book Industry Charitable Foundation, the same charity that DC Comics is donating $250,000 to in order to support comic book retailers facing financial challenges in the time when many stores are now forced to be closed and are not getting new product, therefore becoming unable to stay in business.

So far, they have posted three items up for auction on eBay for this cause. They’re calling this “Crisis for Crisis.” 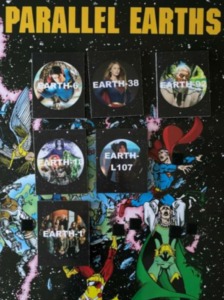 First off, a “pitchboard” was created for producers to present to Warner Bros. Television and The CW what the different Earths would be in the Crisis on Infinite Earths crossover. You’ll see in the listing that some of those Earth designations had changed prior to airing.

A “pitchboard” was also created illustrating the crossover’s “Paragons.” Note that Ryan Choi is a comic book image as the role had not yet been cast.

Finally, inspired by the Superfriends reference at the end of Crisis on Infinite Earths, artist David M. Jones of Arrow Jedi fame has created a poster of the “Arrowverse Superfriends,” and that’s now also included in the auction.

Bid on the Crisis on Infinite Earths poster!

These items will all go toward those very worthy causes, so be sure to check them out and bid!