Charlotte Ross on Donna Smoak: “I’m The Luckiest Girl In The World” 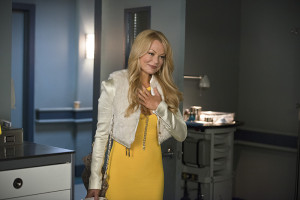 MAMA SMOAK IS BACK!

Charlotte Ross (“The Secret Origin Of Felicity Smoak”) returns as Felicity Smoak’s mother, Donna, in tonight’s episode of Arrow, titled “Public Enemy,” and aside from some promotional photos, we haven’t known a lot about what’s bringing the character back to the story, aside from the notion that a legion of fans loved Donna and wanted to see her back.

Our favorite of the five Mrs. Buchanans spoke with us yesterday to promote the episodes, and she offered some hints as to what’s coming up for Donna. We also were able to get some clues on Donna’s reaction to Felicity’s love life, Felicity’s dad (!!), and whether or not “SmoaknLance” – a pairing of Donna Smoak and Quentin Lance – could become a reality.

Enjoy the interview. Please note that is spread into two pages. 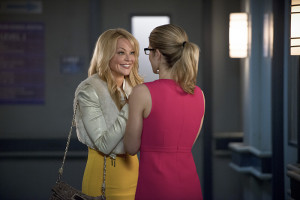 What brings Donna Smoak back to Starling City this week?

I think Donna doesn’t wait for an invitation, so she pops on in. [laughs] You can maybe guess that she’s working in Vegas at her poker table, and a lot of stuff’s going on in Starling City… maybe she’s watching the news or something… whenever my daughter has things that she’s going through, I really want to be there. I think that as a single mom, [my character] loved her to death, and then we had a bit of a falling out as she got older, and I’m really trying to rekindle our relationship and be there for more, and I love her so much.

I really want her to choose the right people and make the right decisions, and of course Donna doesn’t wait to be asked. She just kind of says what she wants. I really want what’s best for my daughter, so I really want to come there to help her.

Do you get to interact with anyone you didn’t get to work with before?

Ooh, good question. I think I’m going to take the fifth on that one. You already know in the episode I was in before, I saw Oliver and Ray, so…

This is kind of following up on that: I’m sure you’ve read that Paul Blackthorne is pushing for Quentin Lance and Donna Smoak to get together. Do they end up meeting?

First of all, he is so funny. We all know that he has openly said he hasn’t gotten laid in 7 years on the show, which is the funniest thing ever. [laughs] 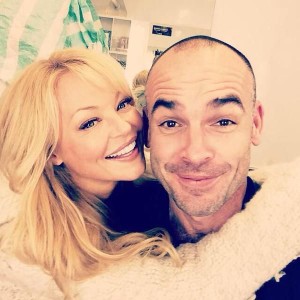 The fans are amazing. Everybody hears and sees what the fans are saying; they’re extraordinary. They started this hashtag #SmoaknLance, and Paul and I were on set, and we were like “you and I haven’t even had a scene together, they already have us married… what do you think of this?” And we’re giggling, because his character has been through so much, and has to be so serious…. he’s had a lot of pain, and Donna’s had a lot of pain too, and I think she could really use some love in her life, but she’s also a little more out there, and it might be a fun kind of dichotomy between the two.

So, we took a selfie, and the fans kind of went off with that… so, yeah. I think that Paul and I are both open and excited about the prospects of us having a relationship. Definitely.