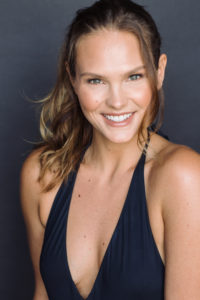 The Arrowverse has had a Frost, a Cold, and now… they have a Freeze.

While we’re not sure if this means we’ll be seeing Mister Freeze himself, Cassandra Jean Amell — wife of Stephen — will be playing Nora Fries, wife of Victor Fries, in this year’s DC TV crossover, airing in December on The CW and comprising of The Flash, Arrow, and Supergirl. The crossover will also be introducing Batwoman as well as Lois Lane, who today was announced as being played by Elizabeth Tulloch.

Tyler Hoechlin will return as Superman. With suspicions rising that Gotham will be on Supergirl’s Earth-38, could it be possible that Freeze is a villain there?

Cassandra’s previous credits include America’s Next Top Model and guest appearances on One Tree Hill, Hart of Dixie, and Mad Men.

We will be horribly disappointed if the phrase “NORA! WHY DID YOU SAY THAT NAME?” doesn’t come up in the crossover, as it seems Nora is as prevalent a name in the Arrowverse as Dinah is, or as Martha is in the movies.