New Star City mayor and wife of the Darhk one himself, Ruvé Adams, has a connection to another important figure in DC Comics media history. 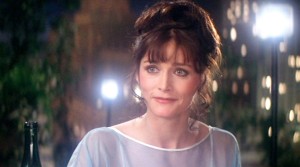 The actress playing Mrs. Darhk, Janet Kidder, is the niece of legendary “Lois Lane” Margot Kidder who starred in the Superman films with Christopher Reeve. She also made an appearance in the Smallville Season 4 premiere “Crusade.”

It’s always interesting to see some familial connections in this DC world. In the Arrowverse alone, the actors playing Green Arrow and one half of the first combination of Firestorm are cousins… and that half of Firestorm and the Silver Banshee are going to be getting married! Beyond that, Katie Cassidy’s grandfather starred as the villain in the production “It’s A Bird! It’s A Plane! It’s Superman” and her dad was Mirror Master on the original Flash TV series. Her [half-]uncle, Patrick Cassidy, also has a DC pedigree: First, he was Lex Luthor Jr. (sort of but not really) on Lois & Clark: The New Adventures of Superman; he later played Henry Small, the actual father of Lana Lang on Smallville.