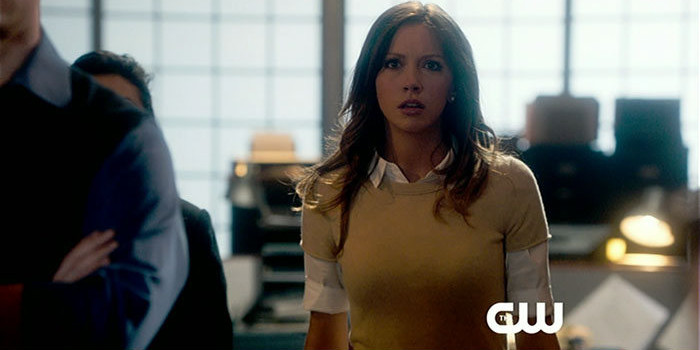 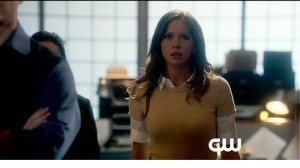 Casting a character as iconic as Dinah Laurel Lance had to be a difficult task for the casting directors of Arrow. A strong actress is required to play a role that requires a lot of depth in addition to the possibility of being able to kick butt later along the line. Fortunately, Arrow was able to get a big name – and a talented actress – in Katie Cassidy. As Laurel, Katie brings a sensitivity and a drive to the role – traits that the “Black Canary” has had in the comics for decades.

We were able to speak with Ms. Cassidy at the Arrow press room at Comic-Con, and here’s a bit of what she had to say about playing this iconic role. Please do not reproduce this onto other websites; instead, just place a link to GreenArrowTV! Thanks!

For starters, Katie talked about the personal responsibility that Laurel has. While Oliver takes on a bow and arrow to exact justice upon Starling City, Laurel has entered the field of law, working at a group called CNRI that helps people in need. For Laurel, this drive to help people originated when she was much younger. “I feel like at a young age, she had to take care of her sister and her father,” Katie explains. “I assume that she lost her mother at a young age, so she was a caretaker. She took on that role, which then later developed into her wanting to become a lawyer. She tries to see the best in everyone. I think that she’s very, very driven, and she has a huge heart. I think she’s sensitive. She has really strong morals and values, and she expects everybody to live up to them the way that she does.” The Oliver she knew – even though the two of them, as well as their friend Tommy Merlyn grew up together – might have behaved oppositely back in the day. Katie is aware that Oliver and Laurel have a “huge history.”

“Even though he’s broken her heart, and as angry as frustrated as she’s been with him or at him, she does have it in her heart for forgiveness, and she has to let herself emotionally go through that path to get there,” she says. Beyond that emotional journey, you can still expect to see Laurel as part of the action of the series as it goes forward. “I think that she does get involved in the action story part of it,” Katie says. “As Oliver is out there fighting crime or doing his planning and plotting, she will become a part of that story, but not as far as whether she turns into a superhero or not. I don’t know,” she says, alluding to Dinah Laurel Lance’s comic book alter ego, the Black Canary. However, “I think it would be cool if, at some point, Oliver takes her under his wing and teaches her,” she adds. “That would be awesome.” 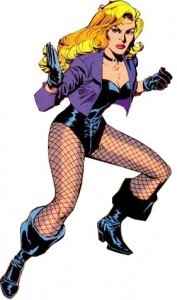 At least at the current time, the producers have not tried out Katie Cassidy in a pair of fishnet stockings.  “No, they haven’t. I don’t know if we’re going to see fishnets,” she reveals. “I have this little action figure, and it is the Black Canary. A fan sent it to me, which was really sweet. It has fishnets and a leotard, and these high heeled boots. I was like, ‘this is not a lot of clothing’!” she laughs. “But, yeah. It would be fun,” she adds.

Katie seems happy that she is playing a “nice girl,” as she has played a lot of “bad girl” roles in the past. “It’s nice to do something different. It’s nice to get to play a character like this,” she says. Some of her past characters might not mix well with Laurel. When asked what Laurel would think of Katie’s Melrose Place character, Ella, Katie says “I don’t think she would be a fan.”

“I feel like she’d probably try and take her down for it,” she laughs.