Arrow: Who Was That Guy On The Boat? 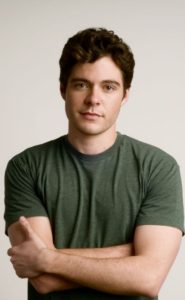 WARNING: Spoilers for the final moments of Arrow season premiere, “Inmate 4587,” are being discussed within.

Midway through the Arrow season premiere, we see a man on a boat headed for what appears to be Lian Yu. The scene seemed to be a bit random in the scheme of things, but then, later in the episode, we see Felicity giving young William Thea’s hosen from Oliver’s time on the island…. then we cut to the future and learn… this man is William, and the person who has trapped him on the island is Roy (Colton Haynes!)

Beth Schwartz confirmed after last week’s screening that the actor playing Adult William — who bears an uncanny resemblance to both Stephen Amell and his younger counterpart, Jack Moore — is Ben Lewis. Lewis’ previous credits include Chasing Life, Scott Pilgrim vs. the World, and Degrassi: The Next Generation. Lewis’ Twitter implies a friendship with Lauren Collins who famously played Paige on Degrassi, and, in a classic episode of that series, Paige was once blocked at a door by a Mr. Stephen Amell himself, early in his career. It’s all connected.

“I’m so excited to announce him because his so great. He’s a really good actor and that’s another thing we’ve been doing a great job of keeping quiet,” Beth said of Lewis’ casting.

So what’s going on here?

The future scenes are “20 years in the future,” according to Beth, placing it before the Legends of Tomorrow episode “Star City 2046” though the events of that series and the Arrow flashforward timeline are not connected.

“Part of what I think made this series so successful in having the flashbacks is that you were able to really get into your characters,” Beth explained. “Especially with Oliver, you knew how he became the way he is. And now with the flash forwards, you’re able to see what is happening in the present day, how that affects the characters in the future. Which is really, really, really fun creatively to tell those stories,” she said.

Schwartz pointed out to Westworld and This Is Us as other shows that do time-jumps as series that she’s a big fan of, but she promised Arrow has its own unique way of doing its flash forward story.

“I love that kind of story telling, where you are kind of putting the pieces together, and that’s what I love about the premiere. It’s like all the pieces are kind of there and at the end you are like “WTF?” There will hopefully be a lot of those kind of moments this season,” she said.

What did you think of the Arrow season premiere? Come talk about it on our discussion forum for the show!